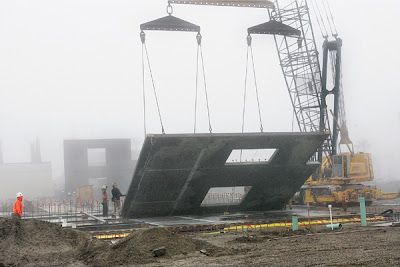 More than a year after being torn down and reduced to rubble, the West Building rose out of the fog early Wednesday morning. Crews used a crane to lift the 25 tilt-up concrete wall panels that will form the new classroom building at Tracy High.

The massive crane that lifted the wall sections prompted a 100-foot safety exclusion zone around the construction site that gave me a challenge in my early morning shoot. Along with shooting through the fog’s mist I had to figure out a way to shoot through a security fence that surrounded the construction site. 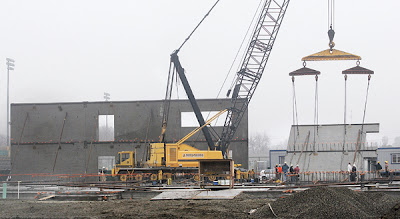 I have always wished I was taller and today a few more inches would have come in handy. Since I was not allowed on the site I had the choice of shooting over or through the fence. The morning fog obscured much of my distance shooting. Shooting with a telephoto lens was dicey at best as the telephoto lens compression effect only intensified the haze and reduced the clarity of my shots. My best bet was to shoot using a wide-angle lens. 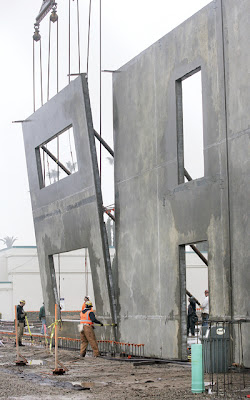 Using the wide-angle lens was limiting. The angle of view of the lens meant I could not shoot the chain link fence, as it would show up in the corner of the frames. My best bet was to hold the camera above my head, above the top of the fence line. It gave me an unobstructed view but I had no way to look through the viewfinder so any shot would be a guess at best on framing. I could prefocus the camera and then between exposures look at the pictures on the digital camera LCD screen to see if I was close to capturing the walls. It was hit and miss but the “spray and pray’ technique got me a good enough look. 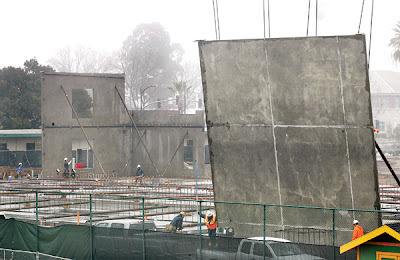 Later in the morning the fog lifted enough to let me shoot with the telephoto lens. I managed to snap a few shots using the narrow angle of view to shoot between links in the fence to get some detail shots of the crews as they worked on the wall and their temporary supports. Later I climbed the football field bleachers to get a higher view of the wall panels as they were lifted into place. 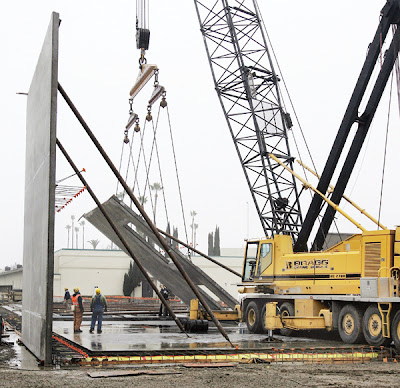 Two hours later and nearly frozen in the chilly air I had enough of a variety of walls going up that I called it a day on the assignment. Hours later I got a call that the building was almost done so I returned for a couple of shots of all 25 walls standing. Hard to believe that a little over a year ago it was rubble and debris in that very spot.

I will be making more trips to the West Building site as work progresses and it will be interesting to see how it will change from a single wall slipping up on a foggy morning to the new flagship at Tracy High.
Posted by Glenn Moore at 5:50 PM