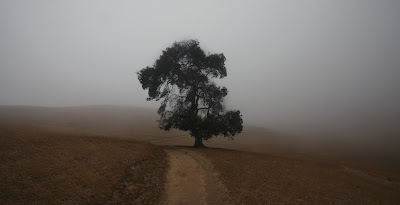 Today's hike was a sign of the days to come.  Climbing near Brushy Peak Regional Preserve outside Livermore I wasn't greeted by vast grassland basking in the morning sun.   Today's hike was a fog-veiled trek as the whisperings of winter approach on the trail. 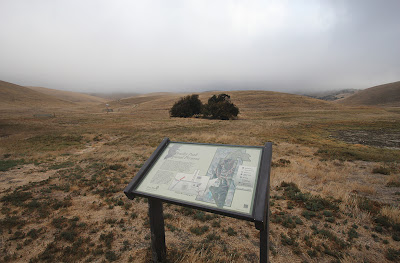 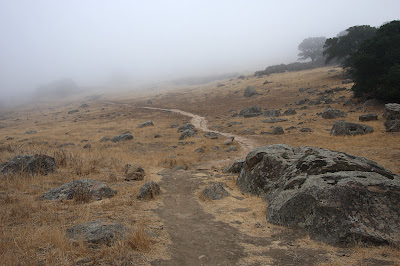 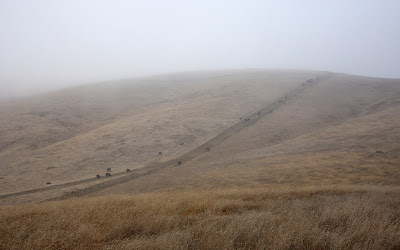 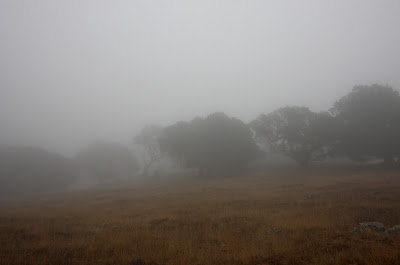 Crossing over the Altamont the sky grew gray as the line of fog stretched out towards the Bay Area.  It was going to be a cool hike, far from the last few months sweltering adventures.  Pulling into the Brushy Peak's Laughlin Ranch Staging Area I could see the fog nestle into the hills I would be hiking along. 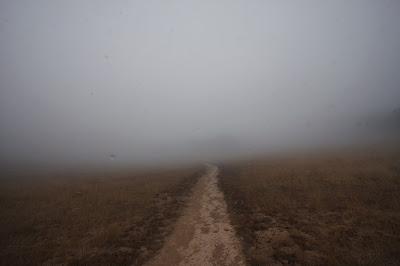 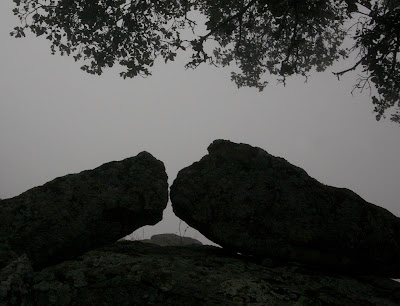 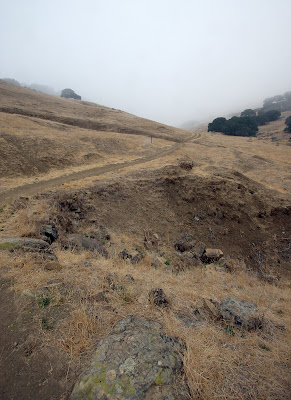 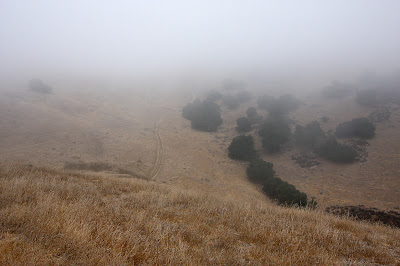 I hiked a portion of Brushy Peak a couple of years ago as part of a story on two women who wrote a hiking book.  To give us a quick photo op they led us on a 3-mile hike or so of the hills on a blustery January day.  Today's hike would take me around the entire park on a just over 6-mile hike. 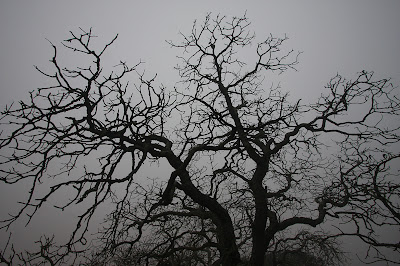 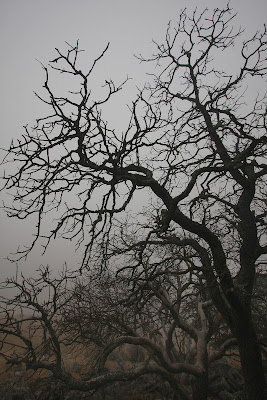 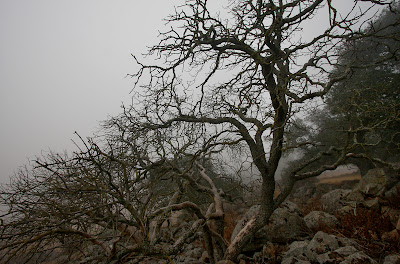 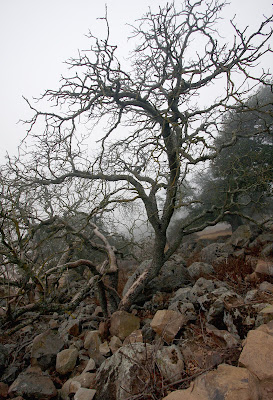 I had packed a sweatshirt just in case and it was a good precaution as the fog and wind made for a chilly start to my hike.  The route would take me up the West Side Loop Trail to Brush Peak Loop where I would climb near the top of the peak.  I would head back down along Tamcan trail and end up on the Laughlin Ranch Loop to return to the staging area.  The trail though mostly in grassland winds through the hills up and along tree lines with nearly 1,500 feet of climbing in the mix. 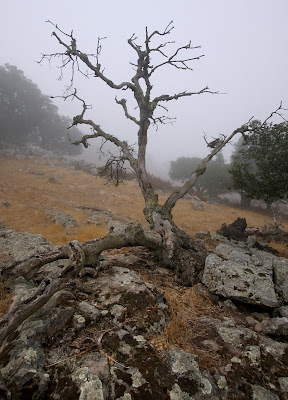 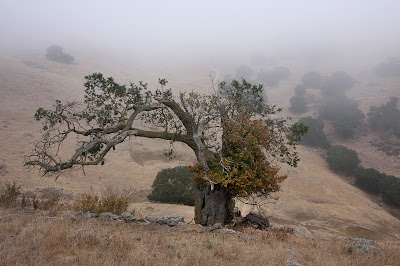 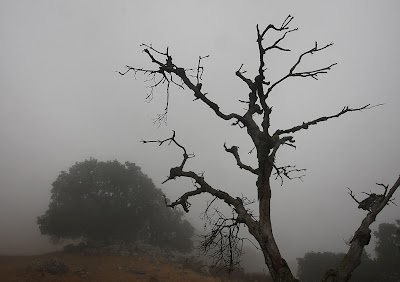 My biggest problem on this hike was going to be the fog.  A thick fog had settled around the preserve and in spot was a damp blowing fog.  Navigation wasn't that bad, I had about 35 yards or so visibility ahead of me on the trail and it was pretty wide but it was making picture taking difficult.  Between the water beading up on my camera lens and my glasses vision was marginal. 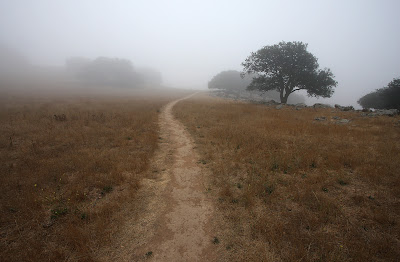 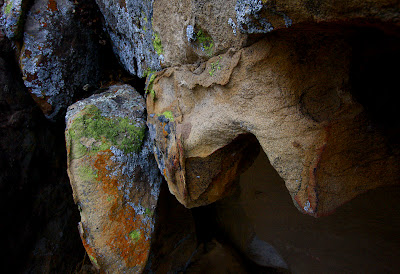 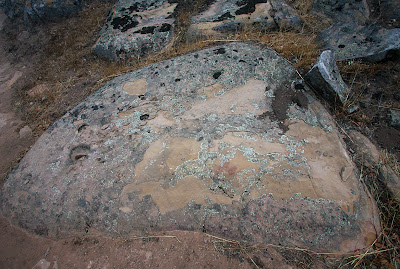 The fog gave an eerie look to the trail.  I seem to specialize in finding the creepy trees on the trail and a nice cloak of fog makes them even more sinister and ghostly.  The horizon line seeped away into the gray blanket enveloping the hills around me.  Fog lowers the contrast of the scene and the colors seemed muted for the most part as I walked in the mist. 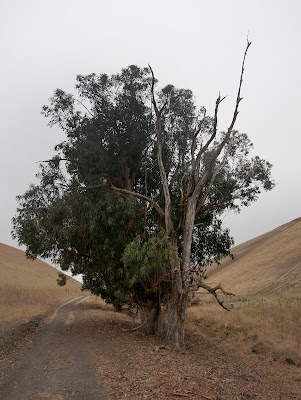 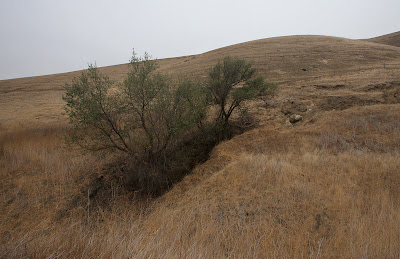 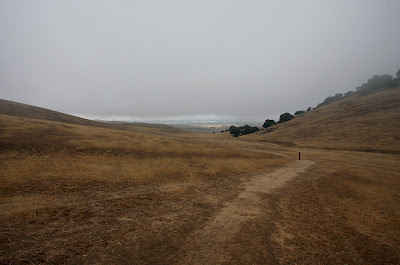 Nearing the end of my hike the fog near the grand lifted and my trail was now a quiet road in the subdued light of the overhead fog bank.  A wind had stirred most of the ground cover off and dropped
the temperature as I made the final turns for the parking lot. 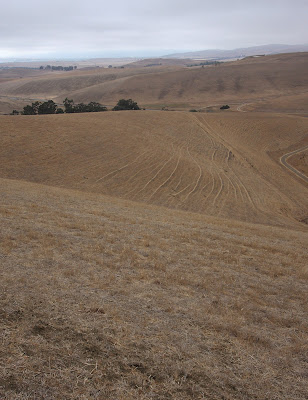 This was the first hike of the winter season, it had that feel to it and there will be more to come.  Soon the rains will come and the hills and trails will take on a new life and view.  This hike also brings me closer to my personal goal of 200 miles  of hiking for the year.  I have just 4 more miles to go to hit the 200 mile mark.I think I'll reward myself with something nice for my efforts, I 'm thinking a cool set of Black Diamond carbon fiber hiking poles. 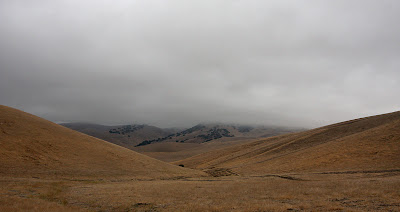 My horizon line may have been been lost in the fog today but I still have my goal clearly in sight.
Posted by Glenn Moore at 11:11 PM