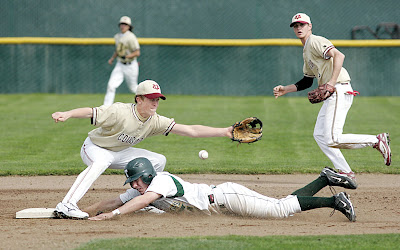 This is one of those times where I have to make a happy choice, which picture works better. I was covering the Tracy High baseball game against Golden Valley of Merced when I caught a series of the Bulldog’s Kyle Moses stealing second. I had two shots I really liked but which one to use?

The first shot above has a lot going for it. Nice action, good focus and it tells a story. The ball is not quite to the mitt and Moses hasn’t reached the bag so there is some good movement there. The player in the right sort of detracts from the image but the action is still nicely centered. 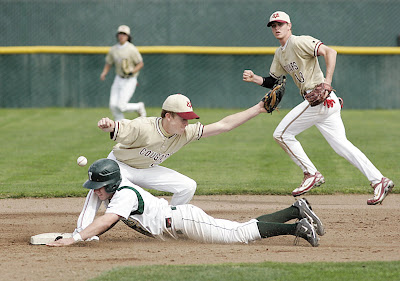 The second picture taken probably a second or so later is also a good image. The runner has made the base, colliding with the leg of the player with a good facial expression. The ball is still tight in the frame but you can see the player missed the throw making a more complete storytelling image. It is a little tighter framed in the composition and if need be I could crop in even tighter.

Which image did I choose? The first one. I think it has more action in it with a better visual flow and motion. I would have been happy with either shot making it to the paper but the top shot just has a better feel.
Posted by Glenn Moore at 2:24 PM