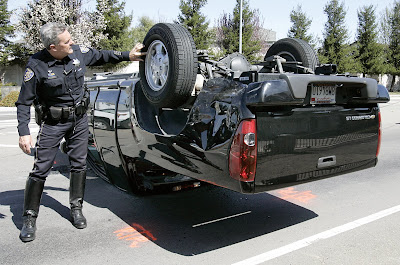 I have been trying to figure this out all day. Seems that a couple of photos I took on Thursday are big news. Two Sacramento television stations asked to use them for their broadcast today. Were they of a bank robbery? Nope. Maybe a photo of teacher involved in protests to go with a statewide budget crisis story? Not even close? How about a picture of the UFO complete with a slab of bacon? I wish. No what they called for and seemed to be the talk of the town were the pictures of a minor injury accident. The rollover on Valpico Road at MacArthur Drive seems to be having its 15 minutes of fame and I can't figure out why.

In all honesty I almost didn't go to this accident. I was processing photos in the office when the original call came across the scanner. It came across as an 11-79, an injury accident with an ambulance responding. Now I hear this call all the time. Not wanting to seem like an ambulance chaser we don't go out on every accident call we hear, the vast majority are only property damage calls which we stay away from. We go to accidents that involve major injuries, fatalities or those accidents that are for lack of a better description photogenic. Rollovers fall into that last category so I tend to check them out when I can. 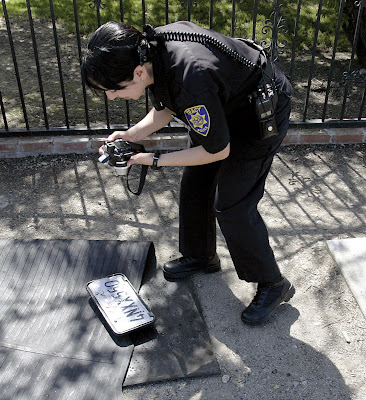 This accident wasn't dispatched as a rollover. There was no call for an air ambulance, no mass casualty incident (MCI) alert, nothing. Just a two car collision. The battalion chief that went on scene informed the dispatcher they had two delayed patients which is minor injuries. It sounded tame. Police traffic on the scanner was reporting the second car had left the scene, it was now a hit run, interesting but still not worth photos. it wasn't until someone told one of the fire crews to stand by with the vehicle on it's roof that I grabbed my gear and headed out the door. A rollover is always worth a picture and we could use it to upload something fresh to the website. 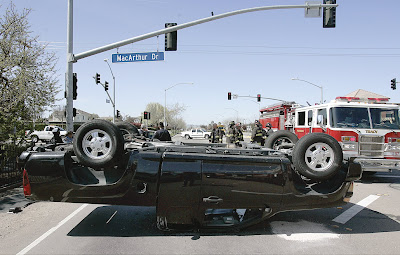 As far as rollover accidents go it was a good one to photograph. No one was killed or even seriously injured so it was a pretty calm scene. Police officers were taking measurements, collecting evidence, getting yelled at by neighbors who want the speed limit lowered your average accident scene. The truck, a Chevy Colorado LS had traveling eastbound on Valpico Road entered the intersection at MacArthur against the red light when a Ford sedan heading north clipped the truck sending it spinning and flipped on to the roof coming to rest blocking the eastbound lanes of Valpico road. The sedan lost it's front plate in the collision which officers found and were running the plate looking for the car and driver. I showed up, got my shots, went back to the office, went to the newsroom potluck and then processed the photos. It was just another accident. Kind of odd that the sedan left the scene if he may not have been at fault, kind of funny he left his plate at the scene but all in all it was just another accident. 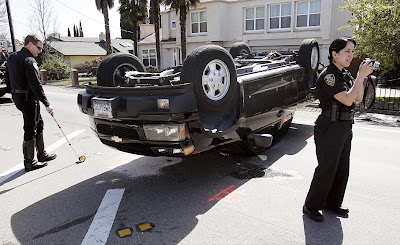 It certainly wasn't the most spectacular crash I have been to in Tracy. the rocket scientist driver doing 85 on Orchard Parkway who clipped a couple of trees and then wound up upside down on speed limit sign was by far more dramatic. As was the driver of a car who crashed into a semi truck on Chrisman Road and wound up beneath the trailer and had to be cut free from the car. That was a much more violent crash. But why this rollover garnered two television stations interest is beyond me. KCRA even sent a crew down to film the scene of the crash that happened a day before.

Yeah I'm not sure why this accident is so popular. The last I heard is they might have found the driver and made an arrest. I think the Press will do a follow up article on the crash since it gaining so much popularity. But as I told the other staff members in the newsroom when the second television station called, it must be a slow news day in Sacramento, I mean a real slow day indeed.
Posted by Glenn Moore at 10:32 PM

I think it's the "dumb criminal" aspect of the accident where the not at fault driver left the scene and left his front plate for the police to find. Rather unusual circumstance.