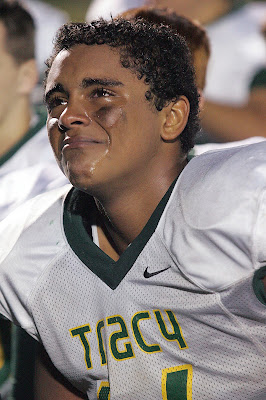 Two images, two moments in time with the same person but a much different story. I was covering the Tracy High football playoff game against St. Mary's when I captured two pictures that told the story of the game from beginning to season end.

For the football coverage this year I have been putting together slide shows for the web story.  They usually run anywhere from eight to fifteen photos.  For the playoff game in Stockton I planned on covering the whole game, getting there early to cover any interesting pre-game activities and then staying to the end if it was close to capture any post game emotion. 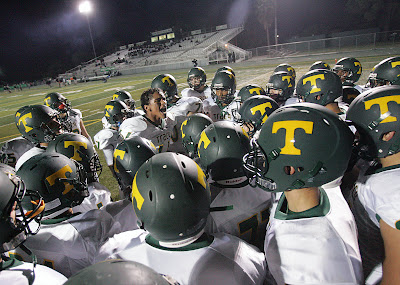 With five minutes to go before kickoff Tracy High senior Nate Shelton led a team huddle where he exuberantly called for his team to take the field and battle St. Mary's.  His speech was emotional and using my wide angle zoom held high above the huddle I captured the action. 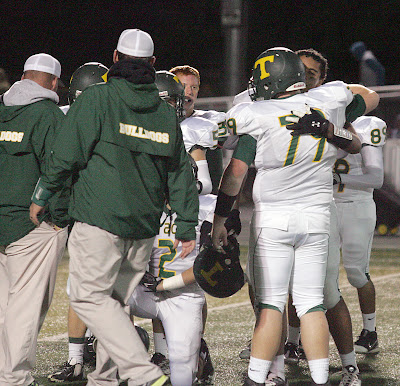 St. Mary's would go on to defeat Tracy 34-6 and move onto the next round of playoff ending the Bulldogs' season.  The team gathered one last time for a huddle with their coaches and it was there that I saw Shelton again with a much different emotion. With his last game in a Tracy High bulldogs uniform over he knelt on the field an cried as the coaches talked to the team.

So there is always that little hesitation, should I photograph him crying or not?  You debate the ethics and necessity of capturing his tears for hours but in the field I have to make a snap decision and I chose to go ahead and shoot.  I try not to edit in the field, those are choices made more wisely away from the scene. 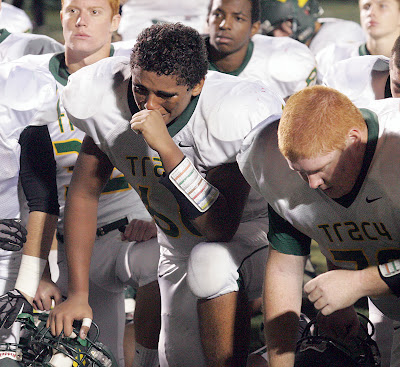 I tried not to be too obtrusive shooting with the 70-200 zoom as I watched the team and Shelton come to grips with the loss.  In the end I think it tells a different part of the story showing the depth of emotion the players had for the season coming to and end.  I decided not to lead the slide show with the image but made it the second picture.  Among the photos in the slide show is an image of the coaching staff reacting to the St. Mary's team scoring with two seconds in the first half to take a two score lead. 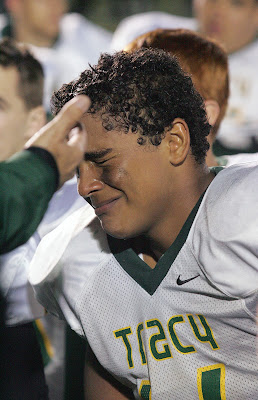 I halfway expected complaints and criticism of my choice to shoot and use the photo but I haven't heard any so far.  It's hard to gauge what people think but I think in context of the game and the other pictures it is presented along with it tells a complete portrait of the game, their emotional highs and the depth of their season ending loss. 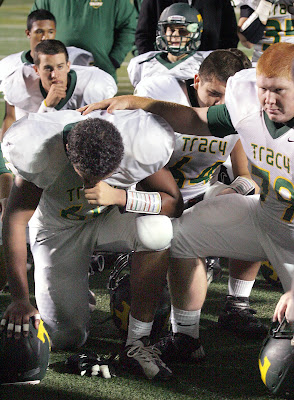 Same person, two pictures, two entirely different stories from one game.  It's all about telling the whole story, good or bad, happy or sad.  That's what the job is all about.
Posted by Glenn Moore at 10:27 PM