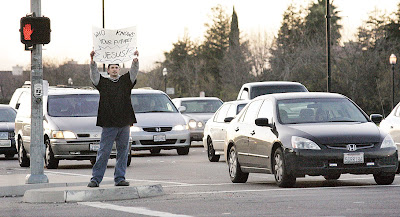 This is one of those assignments that just frustrated me. A last-second go and grab these pictures request with no info, the wrong address and no help is the kind I hate to see.

I knew this was going to be trouble when we got the phone call from the church group who were rallying at the intersection of 11th Street and Corral Hollow Road. Honestly it was a non-event, and not really worth covering. The attitude was it beneath a reporter to cover but hey it’s not like the photo department has any standards and against my protests they assigned it, wrong address and all. 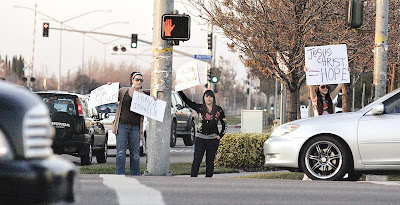 I knew it wasn’t going to be much of anything but I managed to snake out a couple of shots. Nothing spectacular but they told the story. Later I would find out that no one really had any interest in the assignment at all and they wound up in the journalistic equivalent of the dead letter office. No reason, just unwanted.

Now nothing kills a field reporter more than seeing their work go to waste. It seems unfair that it is cast aside. I take it personally too as I feel that photographers are equals in the newsroom but sometimes it just isn’t so.

It’s a good reminder never to get to attached to your efforts; there is always something always there to throw wrench in the works.
Posted by Glenn Moore at 9:47 PM