Santa’s got a new ride 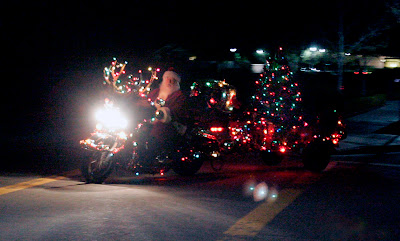 Making his pre-Christmas rounds Santa made a stop at Mountain House’s Wicklund Park. Santa’s trip into the windy streets of Mountain House was not aboard his trusty reindeer powered red sleigh but aboard a sleek, fuel injected chick magnet. Santa has a new ride and it’s a Harley. 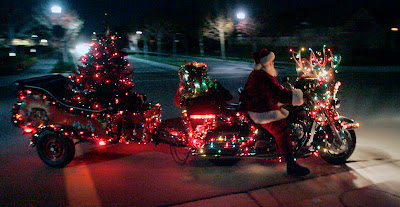 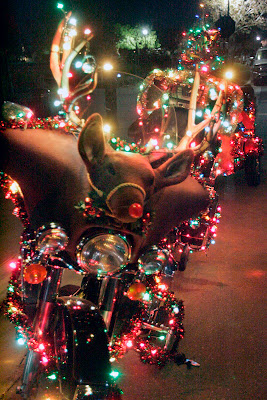 Now I usually end up photographing Santa arriving in town onboard a fire truck so imagine my surprise when the rumble of motorcycle heralded his arrival. His motorcycle decked in garland and lights pulled a trailer with a small, decorated Christmas tree onboard. 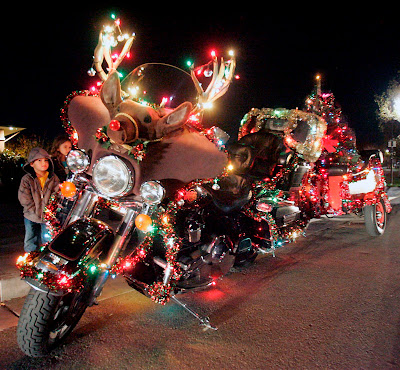 Long after he parked his motorcycle the new sleigh was still drawing a crowd as he listened to lists from children gathered in the park’s gazebo. I bet it draws quite the crowd on the road during his December drives. 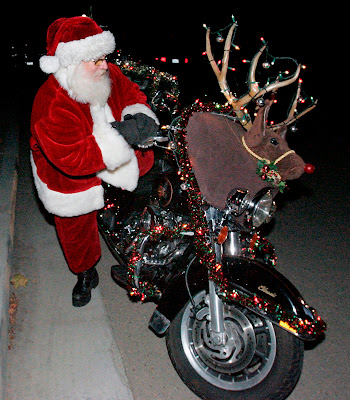 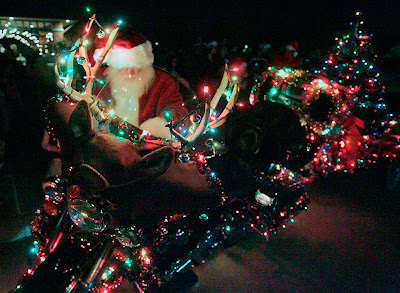 I don’t know if Santa will give up his trusted reindeer fleet for his Christmas Eve rounds. That loud roar as he pulls up to the chimneys on his toy deliveries would be dead giveaway to kids trying to sneak a peek as he drops off presents for good boys and girls. Still it is a sleek ride glowing in the dark with the strings of Christmas lights hanging across the bike’s frame and trailer. Yeah I think I would take the reins of a Harley for a long winters ride over staring down the butts of eight grumpy reindeer any day.

Now that is cool! I'll have to come up with something like that for my Harley.
Merry Christmas!