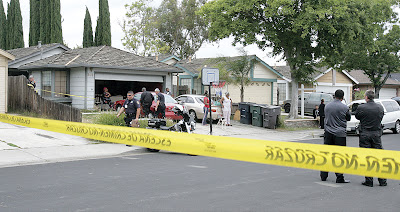 It has been quite a while since I found myself behind the line but a trip for lunch Monday afternoon was interrupted by a report of a shooting coming across the scanner.

Arriving at the scene it was a little confusing.  Squad car filled the street as an angry family vented their frustration at the shooting.  I would later learn it was a verbal argument between neighbors that escalated in to a shooting.  The victim was not seriously injured and the suspect fled the scene and the search is still underway for his whereabouts. 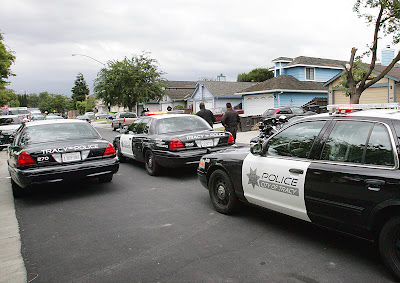 For as much as the web commentors want to make of this act of violence I don't think this shooting is an indication of how safe Tracy is.  It was an argument between two people and one when one person tried to walk away form the argument he was shot.  A horrible event but I don't know how police could have prevented the shooting.  I hear police calls across the scanner during the day about fights and arguments.  Some arguments escalate to fists, maybe some to knives and in this case tragically to a gun.

Unless we put a police officer on every street, on every corner and turn into a police state bad things will happen.  It is just human nature, some people are violent.  The house where this occurred had a history with the police and the suspect in the shooting has been a a visitor to the jail system before as his booking photo that was circulated to the media indicates.  Maybe this shooter should have never been back on the streets after his last crime but that is a matter for the court system not local law enforcement. 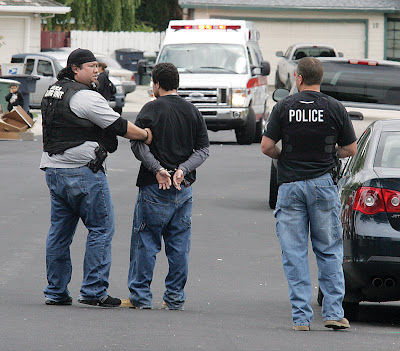 I can't remember what the last shooting was before this.  The violence looks to have calmed down as there is not the gang wars raging from months ago.  This shooting seems to be an isolated incident from a house that has known to be a problems and a crack down on the occupants is probably at hand.

I for one am not going to run around and say the sky is falling and Tracy is a war zone.  We're not living in Mayberry, get over it already.  Maybe some people would feel better living in safer town lime Modesto, or Stockton, just remember to bulletproof  vest when you go to your mailbox if you move there.  We are getting to be a big town and so we will have the big town problems.  Vandalism, graffiti,  fights, the violence all come with a big city price tag and it is time to stand up and be part of the solution instead of decrying the situation venting anger and spewing contempt in anonymity.  That doesn't solve anything, it just makes you part of the problem. 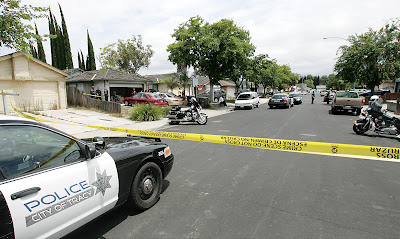