A tale of two tapes 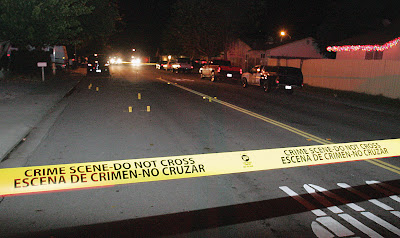 So there was a little bit of déjà vu the other night as I stood behind the crime scene tape taking pictures of a shooting scene on Cypress Drive Thanksgiving night.  I had that uncanny feeling I had been there before.

I have spent a good deal of time behind the crime scene line and one shooting scene sort of blurs into the next.  But still there was something oddly familiar about this view I had of the crime scene tape flickering red and blue in the lights from a police cruiser.

Then I knew exactly why it looked so familiar, it was going to be the cover of the Tracy Press on Friday.  We built the paper on Wednesday as everyone was scheduled to be off for the holiday.  To go with the story on crime around the holidays ramping up I found a photo from a stabbing I covered in December of 2010 on Eaton Avenue.  This was the view a year ago. 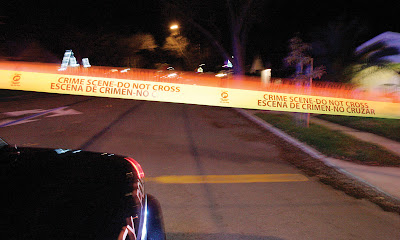 So as we publish a story about the efforts to curtail the crime near the end of the year three separate shootings in town wound two in one day.  The story seems to change but the sights always remain the same behind the line.
Posted by Glenn Moore at 1:49 PM