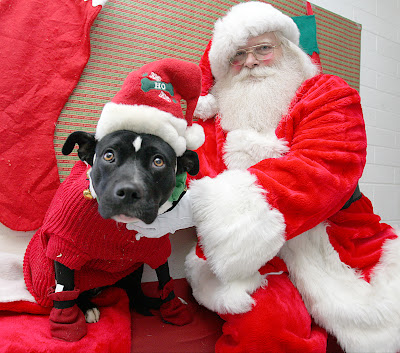 Right around Thanksgiving I was thinking about decorating the office Christmas tree with crime scene tape.  I was about as far from the holiday spirit as you can get.  Shootings, web story comments, leaky roof-it was like someone was telling me to go fa la la la la myself.  Merry frickin’ Christmas.  But on the horizon there was that magical date penciled in on my calendar for December.  No it's not Christmas, who cares about that.  This is an even more special day filled with joy, merriment and a humiliated dog.  Yep it was time to Dress the Dog. 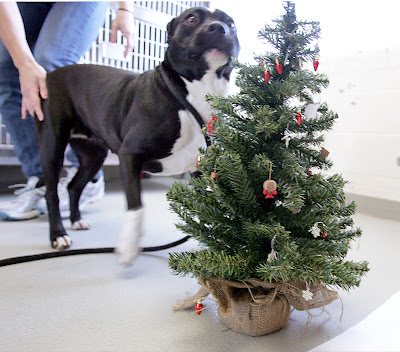 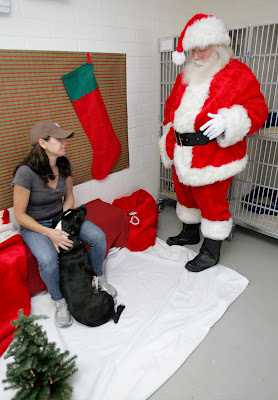 Just like mistletoe and drunk relatives passed out in a bowl of eggnog Dressing the Dog has become a holiday tradition.  Where else can I wrap two dogs with electric lights or sprinkle a possibly toxic fake snow on an unsuspecting puppy?  Maybe in Arkansas but that it is too far away so I settle for going down to the Tracy Animal Shelter to see what holiday shenanigans they have cooked up for me to photograph. 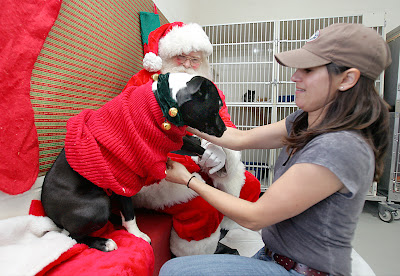 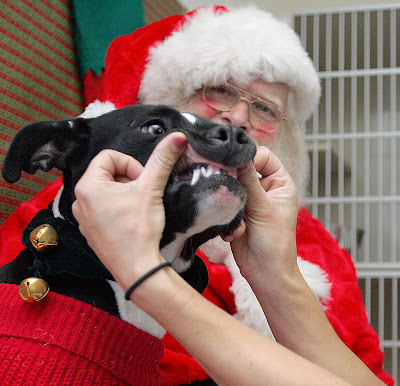 We’re a long way from our first holiday photographs that had a Santa hat forced on a reluctant dog.  Yep, we're in the big leagues now.  What did the shelter staff have in store for this year?  How could they possibly out do the ever-popular “Yiddish cats in a box”?  What could possibly top that?  How about a visit from the jolly old elf?   Yes boys and girls a visit from Santa himself to pose with our lucky Pet of the Week would be our centerpiece this year. 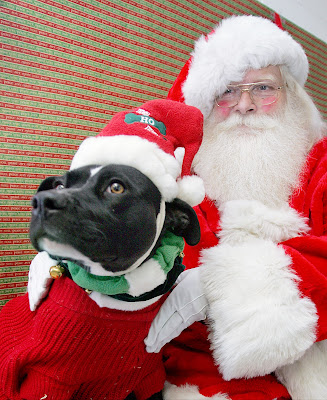 With the sleigh in for repairs Santa rolled up in his red Scion. I was thinking how common is to see a guy in a Santa suit pull up to an animal shelter next to a sewer plant-just act natural.  After the meet and greet we got to see who would would be making their special guest appearance with Santa for the photo.  Drumroll please, today’s winner- a pitbull!  Yep, Merry frickin’ Christmas to me! 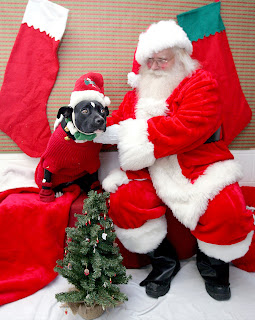 It wasn’t all that bad, our model for the day was Elsie, a pitbull and border collie mix who was afraid of Santa just about as much as some 4-year-olds.  One nervous bark and then Elsie looked for cover behind a shelter worker.  Not so fast you have to get dressed for the photo (this is called Dressing the Dog after all). 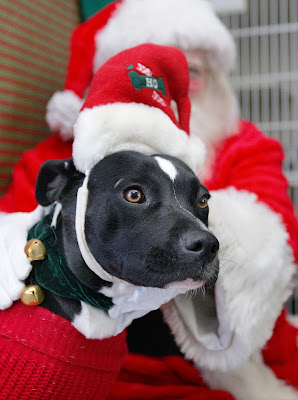 I was told that Elsie had already tried on her outfit and loved it.  This assignment was getting better by the minute.  A dog that likes sweaters and mittens, nice.  The pictures would be taken in a decorated spot in the cat kennel room so all the cats could laugh and call her names and not let poor Elsie join in any cat games.  So as Elsie cowered and quivered and lay on her belly, and while she was getting dressed shook like a bowl full of jelly.  Ok enough of the Christmas stories crap; lets get down to taking pictures. 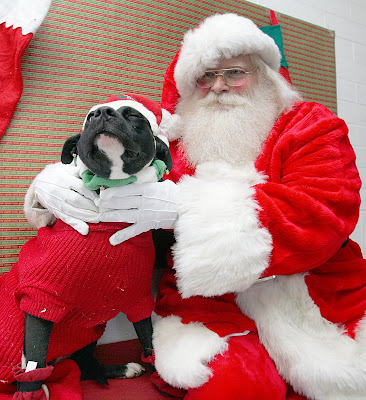 Elsie is in her outfit with more of a whimper than a bang, Santa is set to rock and roll and I’m wishing I had actually died of heat stroke on Mount Diablo a couple of months ago.  So anyway might as well see if Elsie will sit still.  She had the shimmy shakes going pretty good but we pressed ahead with the pictures.  For a pit bull she was surprisingly calm, I think she was too terrified of the big guy dressed in red next to her.  She just sat there and tried to duck down.  Short of strangling Elsie (and we did try that once) we did our best to make her sit up and look festive for the photo.  I felt like one of those really bad mall photographers trying to take a picture of an uncooperative kid sitting on Santa’s lap.  It was hard to get Elsie to focus and look at the camera; even the squeaky toy didn’t hold much of her interest.  I fired away as Elsie surveyed the room looking for a place to hide and before I knew it the photo shoot was a wrap. 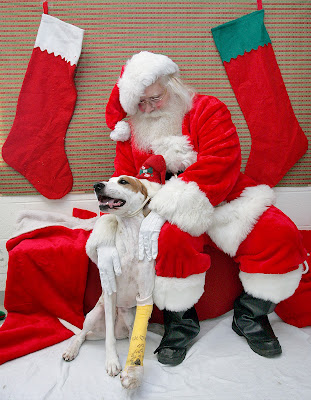 Could this be a true Christmas miracle, could the special holiday edition of the Pet of the Week photo go that easy?  Just for fun we tried another dog and took a few quick shots to send off to a rescue group.  Still no calamity slipping the Christmas outfit on the dog.  Back in the shelter office we tried the Santa hat on the office cat that is notoriously ill tempered and has no patience for such tomfoolery.  She seemed less than amused at her outfit but oddly intrigued by a dancing snowman we added to the picture. 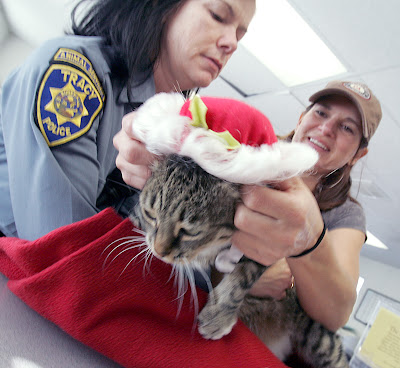 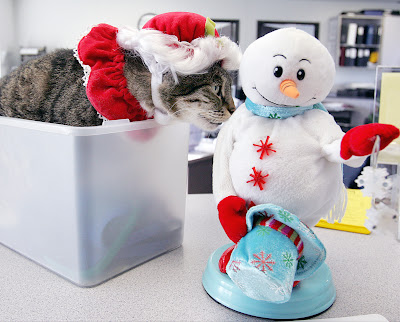 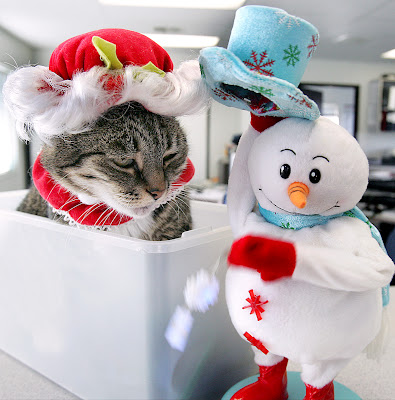 And with a few final shutter clicks Dressing the Dog 2011 slipped into the history books.  It’s for a good cause and hopefully Elsie will find a new home for the holidays and beyond.  I don’t think I’m quite in the Christmas mood yet, maybe I need to field a call of someone mistaking the navigation lights on Santa’s sleigh for a UFO, and then it would really be Christmas in Tracy. 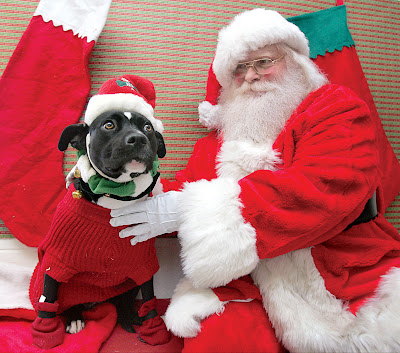 Until then, Happy Holidays and a Merry Christmas to one an all.  Be safe and see everyone next Happy New Year!
Posted by Glenn Moore at 12:08 AM