It only seems fitting.  In mid December of last year I shivered in the pre-dawn hours as I watched a lunar eclipse in the sky above a Lodi wetlands.  On Sunday I sweated in the afternoon soon as an annular eclipse crossed the Tracy sky. 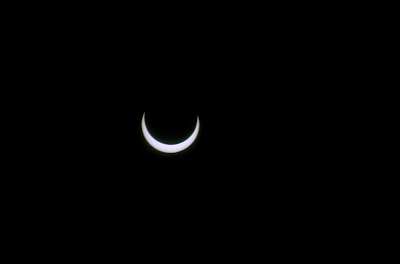 The annular eclipse was the first one visible since 1994.  The eclipse's path stretched from Chine to the Southwestern United States.  the West Coast would see the moon inch across the sun starting shortly after 5:00 p,m, reaching maximum coverage at 6:32 p.m. and ending just after 7:30 p.m.  The annular eclipse doesn't cover the entire sphere of the sun, but often leaves a ring of fire, a thin edge of sun visible.  prediction on local media suggested the sun's coverage in our viewing location would be around 87%, a fair amount of coverage and the light would grow dim at maximum eclipse. 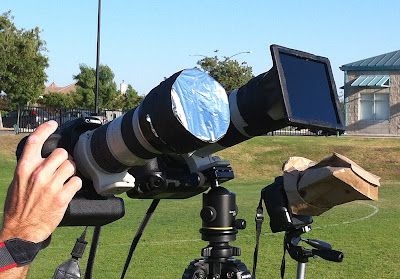 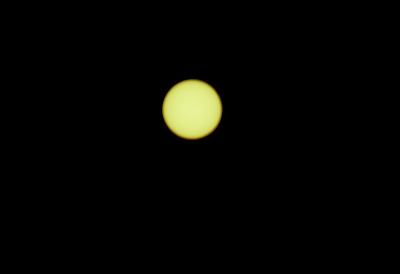 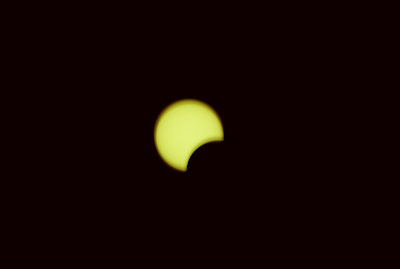 I have shot a couple of lunar eclipses but this would be my first solar eclipse.  And that was my one big problem.  This was my first attempt, I have no point of reference on how to safely photograph the sun.  I spent an hour or two reading up on the topic on different web sites and began to formulate a plan. 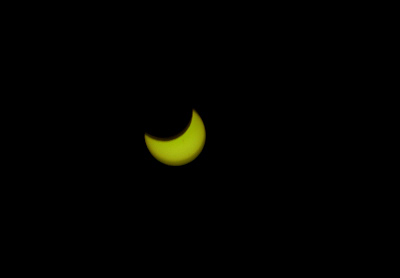 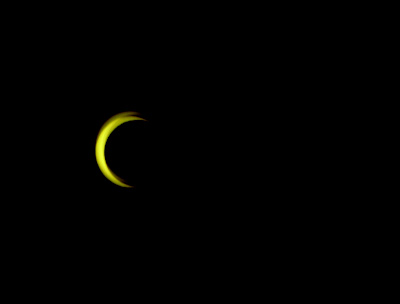 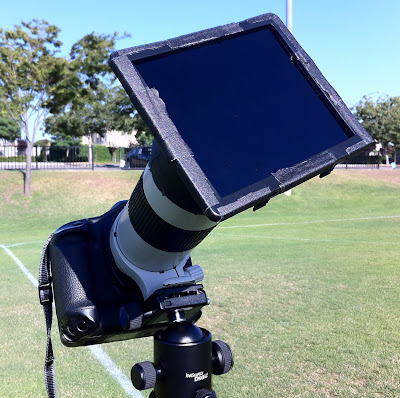 I decided I would go two cameras.  I debated between a short and a long lens but eventually settled on the work Eos 1D MK II one camera with a 300mm and my Eos 40D with a short 70-200mm zoom.  My next task was to think how to safely view the eclipse, what type of filter to put on the cameras.  In my best "MacGyver" moment I came up with a couple of good home brew solutions. 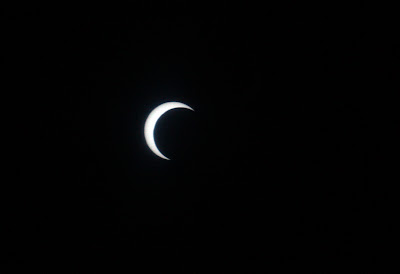 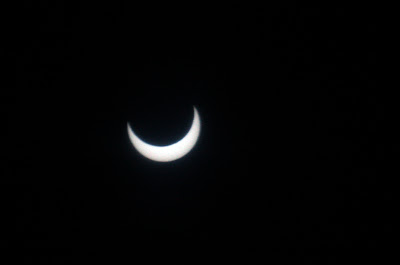 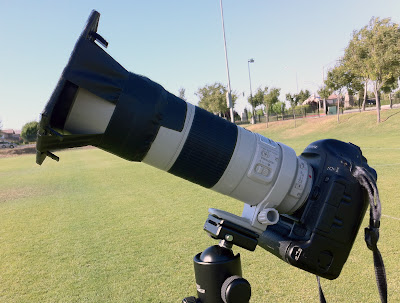 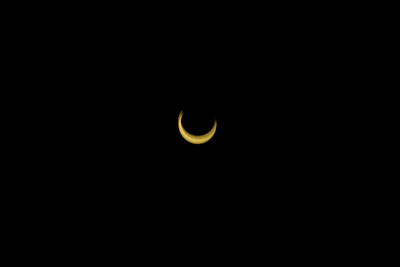 The primary camera with the 300mm lens would use a welders glass filter.  I had read that was the safest route, and since I always think safety first (waiting for the lighting bolt to strike me dead..) I went out to Orchard Supply Hardware and picked up a nifty welders helmet.  the darkened glass viewing pane is removable so I would simply gaffer tape it to the front of my lens. 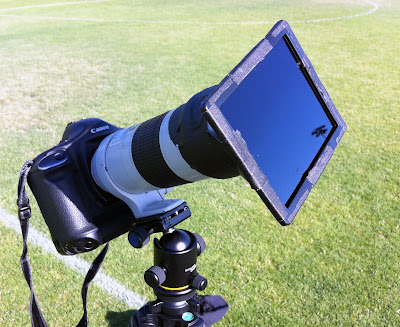 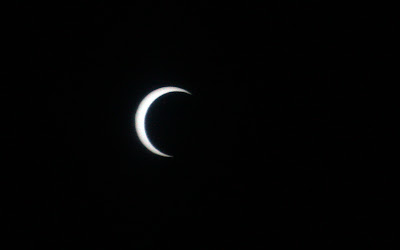 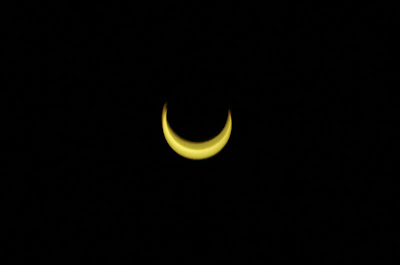 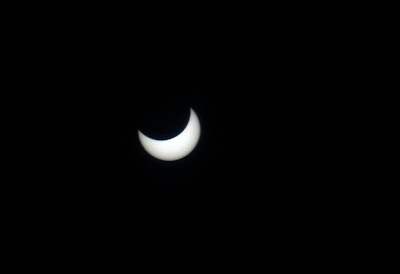 The secondary camera was a different gamble.  Although I had read that it was considered not a good idea I opted for a Mylar filter made from a disposable emergency blanket, sometimes called a "space blanket".  Web posting had cautioned against the space blanket filter as it did not block UV radiation.  I went for three folds of the Mylar and lots of gaffer tape to keep it snugly tucked around the lens shade. 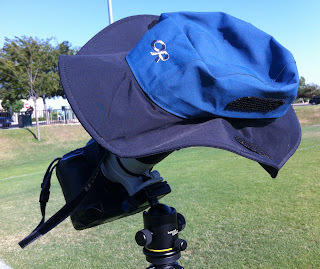 I was worried about the constant sunlight focused on the shutter from the telephoto lens on the primary camera.  it was mounted on my tripod so I used an old wide brim hat as a giant lens cap between exposures.  Alice shooting besides me used a Wing Stop brown paper bag to cover her camera between frames. 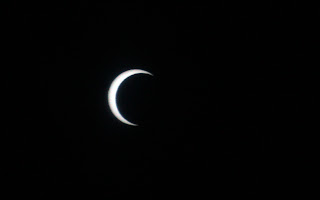 I had found a web site that listed exposures with shutter/speed f-stop and ISO combinations.  I used that as a starting point and fired off a few taste frames to dial in the right exposure.  the primary camera through the welders glass was set at ISO 125 and the best exposures were at 1/5000 at f/9.0.  the Mylar filter seemed more dense and the exposure dropped to 1/100 at f/6.3 at ISO 640.  As the sun near maximum I bracketed my exposures to make sure I held a good separation between the sun and moon. 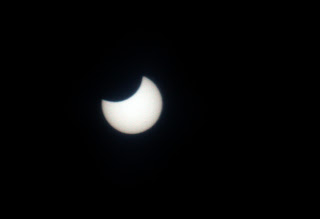 Overall I was pleased with my results.  I think I like the pictures shot with the Mylar filter better than the welding mask.  The color tone came out blue but an auto color correct gave a nice neutral color.  it was easier to focus the camera viewing through the Mylar and the images they produced took less time to process. 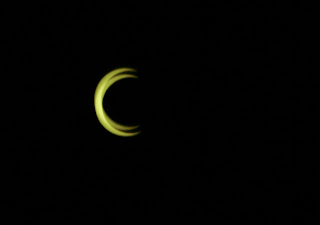 The welding mask filtered images were tinged green and color corrected to a yellow which seems, I don't know- more sunnier looking.  I did get an annoying double image on the shots which I attribute to a reflection off the welding mask.  Still they have a different feel and are a nice compliment. 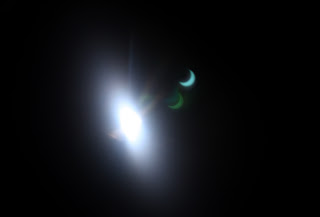 Some my first solar eclipse is over and I can take a deep breath and wait for the next celestial event.  Astronomy web sites are all abuzz over a transit of Venus next month and depending on the viewing conditions I may have to break out my MacGyver gear and have another go at some solar sights.
Posted by Glenn Moore at 11:12 PM