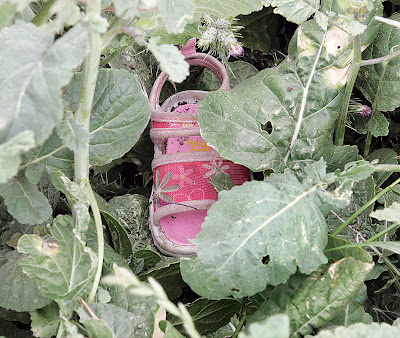 I was checking the comments on the Tracy Press website (never a fun chore) when I came across this odd comment from someone calling themselves “Goodgriefman” about a photo I took at a fatal crash scene on Thursday.  Here’s the comment:

goodgriefman
The Tracy Press has to always delete cathlab's comments? No real surprise there.
But they will not lift a finger to delete a picture of a little girl's shoe in the underbrush?
Hope the new owner brings a new editor from who aint so liberal.

I looked up the user name at is a typical commentor-fake name, fame email, typical coward on the web.  What I find odd is that he got upset about a photo of a shoe.

Don’t mind the picture of the guy covered in mud dying, be upset about a picture of a shoe.
Before the man died he said he had children.  Debris strewn around the crash site hinted toward small children.  There was a baseball bat, a stroller and assorted clothing items including the shoe.

Fire crews began searching for any other victims probing the thick brush and ditch bank with thermal cameras.  None were found.  As part of the normal news reporting I took pictures of everything including a small child’s shoe lying beneath some weeds at the canal banks edge.

So this is disturbing?  Really? Goodgriefman must be the sensitive type, watches chick flicks and cries when he sees a sunset.  Lucky think you weren’t standing in the rain watching the driver die, you might have gotten all shook up.

It’s a hard thing to do, go to a tragedy, watch suffering and record the aftermath.  I wrestled with the photos of the driver, I really didn’t want to show his face and most of clothes were off.  There was a fine line between news reporting, sensationalism and poor taste and I think I choose a series of images that conveyed the crash scene’s devastation, confusion and rescue efforts.

For being upset about a picture of a child’s shoe in the weeds my advice is grow up.  If that is the worst thing you have seen thank the man upstairs and consider yourself blessed.  I get to add those images to the growing list of tragedies I can’t see to forget sometimes.  I’m not whining about that, I chose this job and it comes with its baggage sometimes.

Those of us standing on the canal bank Thursday remember the scene and a glimpse of a child’s shoe is just a tiny part of the story.  Nothing obscene, nothing sensation, just a shoe under a pile of weeds on a very sad day.