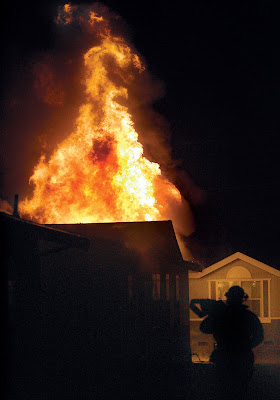 I pulled up to this two-alarm fire shortly after 10:00 pm Thursday evening and I new I had arrived at a hot one.  Flames reached about 25 feet into the air as a mobile home and a house burned off Kavanagh Avenue. 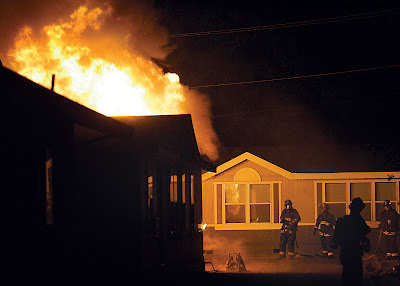 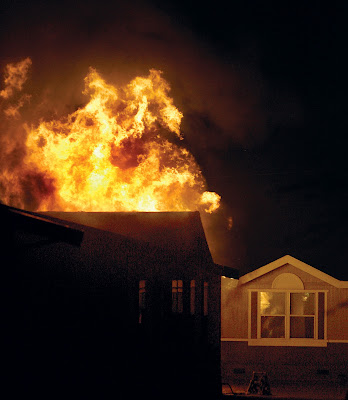 I heard the parade of sirens and switched on my scanner in time to hear the call of a working structure fire.  I grabbed by gear and ran to my car.  Pulling onto Grant Line I had to stop for Banta's Engine 92 to race by.  At the end eight engine companies and the truck would fight the fire that lit the sky with an orange glow. 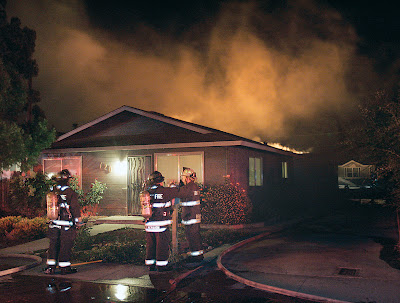 Walking up the street to the fire I could see the flames roll up into the night sky from the roof as fire crews raced to fight the flames.  The home were burning at the end of a long driveway and I just didn't feel safe enough due to the amount of open flame and cramped quarters.  From the road I could see the crews illuminated by the glow from the fire and the flames progress across the roof. 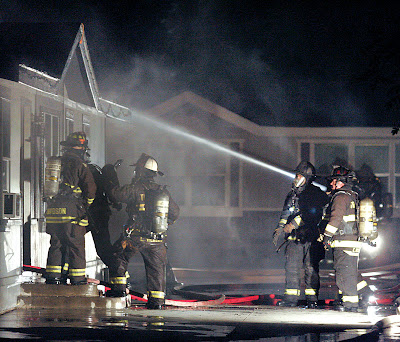 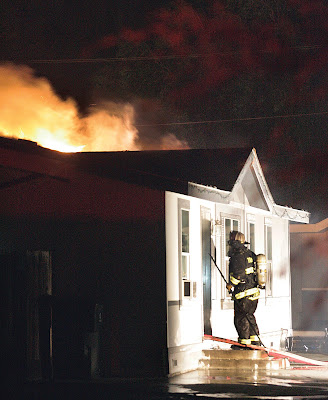 A fire scene at night is a dizzying affair through the lens.  In all the action you try to balance exposure of the flame against the dark backgrounds, using flash seems to dull the look of the flames.  I shot a few test frames then tried to grab as many shots of the fire's progress as the crews worked to get a handle on the spread of the flames.  Strobe lights reflect of the viewfinder glass making focusing a chore and the available light photos take on a ghastly red tinge from the emergency lights. 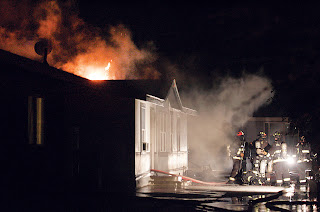 Walking in the darkness punctuated by the brilliant flash of red lights I tried to find a vantage point to get a good look at the action down the alley.  Smoke billowed out and the fire and lights cast red and yellow hues as it drifted into the sky. 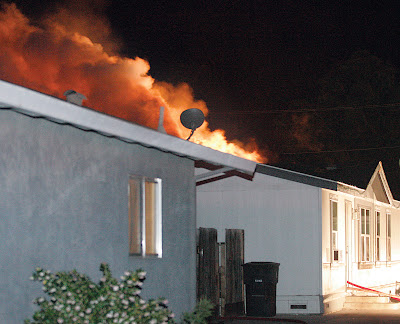 Crews put the fire out in about an hour and then the buildings are bathed in a stark white light from portable work lights.  Deep shadows emerge as the flames no longer illuminate the cracks and crevices of the scene.  Walking back to my car I chimped my shoot and was amazed how bright the flames were washing out detail in some areas of the pictures.

Thankfully no one was injured in the fire or fighting it and I had another late night adrenaline rush.  Like I say, it always a party in Tracy.
Posted by Glenn Moore at 10:59 PM