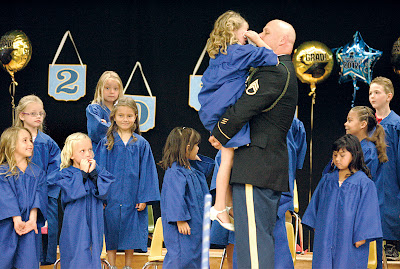 With all the crap I have to see through the viewfinder I tend to get a little jaded and wonder why I really wanted to be a photojournalist in the first place.  Somewhere between the crime scene tape, the victim of the car crash dying ten feet away from me and having to listen to the hostility of local politics I think I would much rather be photographing the mountains instead of working at a newspaper.  Then I have an assignment like this morning's that makes me remember.


I received an email a couple of days ago about a kindergarten class promotion ceremony.  The hook was one of the students, Brooklyn Johnson would be surprised  her by father Timothy attending.  He was going to make it home from his military posting in South Korea in time to watch her walk across the stage.  And it was all a secret to six-year-old Brooklyn. 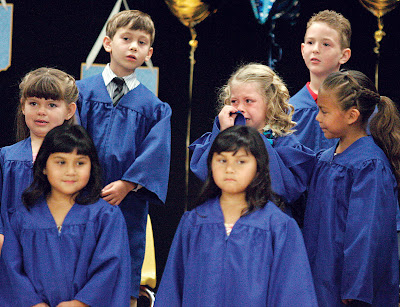 As the ceremony started the principal announced their special guest and as her father walked out Brooklyn began to cry.  A quick hug to comfort her and the ceremony could continue with her father joining the ranks of proud parent with a camera filming the promotion ceremony.

So its not the most exciting assignment or the least bit glamorous but the tears and hugs exchanged by a father and his daughter speaks volumes.  Got to say its my favorite photo I have taken so far this year and a relief from the tragedy and bitterness I have had to capture on assignment so far this year. 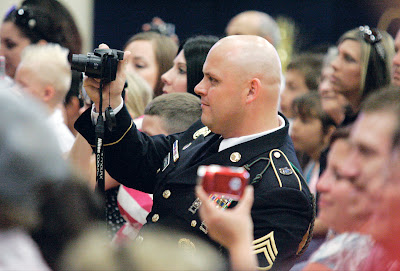 It was a good reminder that there are special moments in everyday life.  That is the true role of a photojournalist, to capture those fleeting moments to share with a community and world, to show them what life is and to celebrate these moments we have.

It has been a rough couple of weeks behind the lens but capturing this moment was worth the wait.  Look past the tragedy and bitterness and focus on the life around us that's what what this assignment was all about. 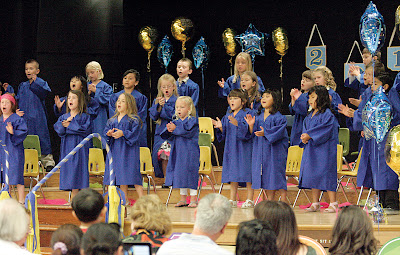