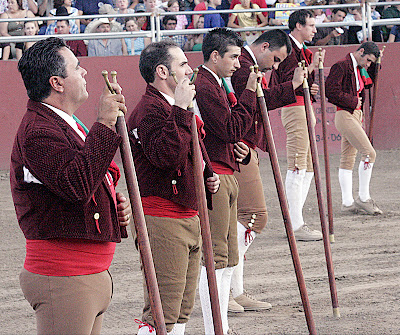 I was looking at the comments section of the story we ran on Friday night’s Portuguese bloodless Bullfights and I was kind of surprised. There were the comments I would expect from people who saw it as cruelty to animals and there were those who thought it was an advertisement of brutality and violence. But what I think slipped through the cracks was that for one night a heritage and cultural traditions from decades past are on display for all to see. 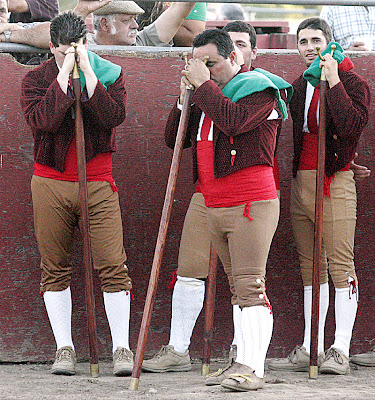 Of all the sights from the bullfight the one I think most people come to see are the Forcado, also known as the “suicide squad”. Performing the pega de cara, (face hug) they end a round of bullfighting with a tackle of the bull. 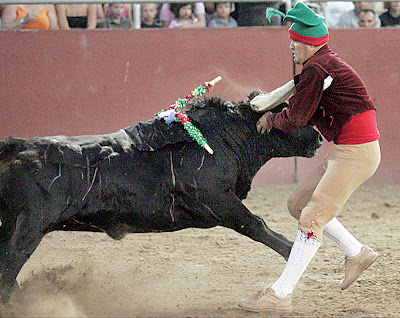 As in past years when they protected royals from bulls charging up staircases they carry pole with a half moon-shaped prong tip called a forcado. Eight men will try to subdue the bull, the first man wears a long knit hat to try and distract the bull. When the bull charges he tries to leap onto his neck as the other pile on top the bull. The last man to the pile grabs the bull’s tail and is the last to let go. 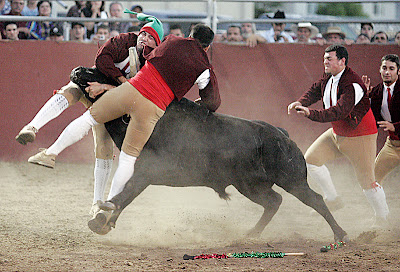 The whole event takes a few seconds. A flash of color, limbs fly through the air, the crowd roars and it is suddenly over as the bull is released to stomp about the ring after his man-handling. If it wasn’t for the walk back to the office you would swear you were transported to a different country with its unique sights and sounds. 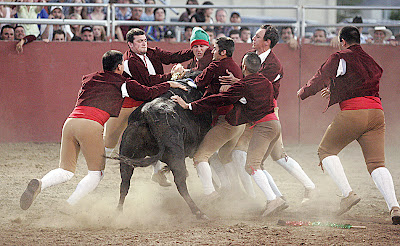 My ethnicity is half Portuguese, and it is a side of my heritage I have never really explored. But one night a year I get a look into my past and the traditions that make us all unique. 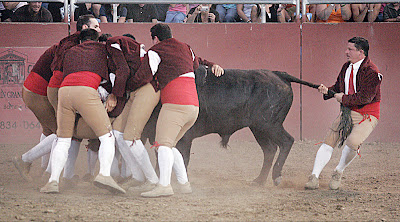 Glenn you have a gift for the photo that is a thousand words and for you writing as well. Next year I will be here for the event. I am embarrased to say in all my 22 years in Tracy I have not been to the "bullfight" Partly for my ignorance to the culture and just too many family activites.

You have explained this tradition well and I hope others will now come to see this as safe for the animal (and maybe the animal gets a little revenge on the people)
We are a community so blessed with many cultural traditions we need to step out and get to know them all.

The thing is, Glenn, we Americans speak endlessly about diversity and tolerance, yet have a fit when foreign cultural traditions are different from our own. If pluralism is the American Value du Jour, then let it be. Bullfights and all...

Thanx for shedding some insight on the bullfight tradition. Education does help.