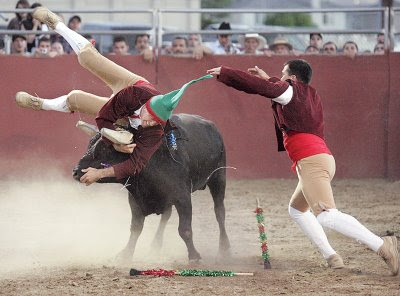 So what could have been the most unusual assignment I had during the year? That’s easy, imagine bulls, matadors and a group of men who proudly bear the title “suicide squad’ and you must be talking about the annual Portuguese bloodless bullfight. Amid the standing room only crowds, summer heat, lack of light at the poorly lit outdoor bullring at night and the fight that broke about between the crowd and some of the bull fighters I managed to squeak out this photo of a suicide squad member going for a ride early in the night. Ole’!
Posted by Glenn Moore at 8:13 PM