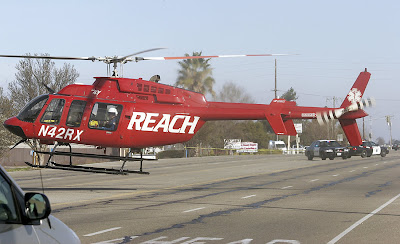 This could have gotten interesting. While I was photographing an air ambulance arrive at the crash scene last Friday a driver tried to drive through the scene but was stopped short of the helicopters landing zone. I could just see him starting to make his way through to my left. The landing was almost aborted but it did make it down safely on 11th Street. You would think the driver would have given the right of way to the helicopter but I guess he was in a hurry.
Posted by Glenn Moore at 4:46 PM

Cool shot of an air ambulance. It is cool to see them in action and it is nice to see them get credit for being a vital part of the health care system.

German TV network RTL had a series called Medicopter 117 that went for 7 seasons ending in 2006, can check it out on Youtube. Would be cool to see it in the US translated to English.