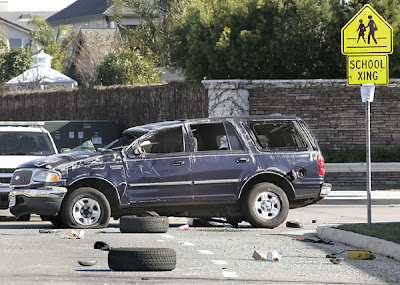 Some people may wonder why we cover automobile accidents. Is there a need for coverage of the death and carnage on the roads? I think there is.

It may be that I have covered too many accidents, but I have sort have gotten numb to them. Most of the crashes I hear on the police scanner go unreported. It is few that catch my attention, such as the rollover by a young driver recently.

A day into his license the driver lost control and rolled five times on a city street landing in a school crosswalk. The crash was fortunately not a fatal and the crash was probably a good lesson for all drivers about speed and safety but what I find more important is the discussion the story created.

I fielded a call this morning from an angry resident who saw the story and wanted to know who she could voice her concerns to about the drivers and speed issues on the street. Would the resident be as concerned if not for the story and picture? Maybe, but the image hits home and reminds us of the dangers on the road.

I have covered worse crashes, some where the images of pain and destruction still linger but I am sure that unfortunately I will see worse in the future. Maybe pictures like this will help persuade at least one driver to slow down.
Posted by Glenn Moore at 4:16 PM