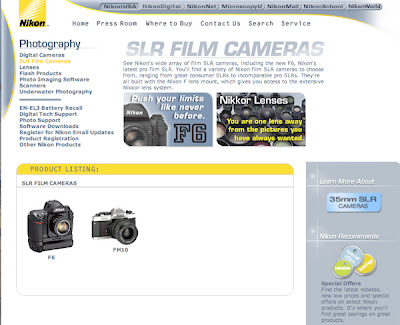 I just looked at the Nikon cameras web site and was surprised by their camera listing. Long a leader in the world of 35 mm photography I took a peak at their film camera listing to see what was going on. I was saddened to see that this one time giant in the film camera world was down to only two film camera bodies.

I learned to shoot on a Nikon FM2 and then went on to use an F2A an F3, an F4 and my last film camera was their F100. That camera body was used to design their first generation digital cameras. The proud line of Nikon cameras is dwindling away.

Long gone into the pages of history are the Nikon F, the Nikkormats and the Nikon underwater film cameras. Gone the way of the Kodak Brownie and the Speed graphic cameras. I read a report that the sale of digital camera was expected to peak at 72 million while film cameras sales to slip to under 100,000. It’s just another sign of the times.
Posted by Glenn Moore at 6:42 PM

Very sad indeed, soon an entire generation will not even know what a film camera is. Gone the way of the vinyl record, and cassette tape. I have my Dad's Nikon FE camera and lenses, it takes amazing pictures.
Use my digital camera for most everything anymore. Kodak must be hurting as well in lost film sales.