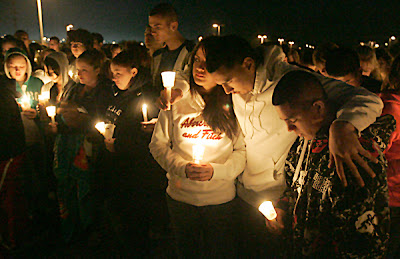 In my 16 years as a professional photographer I cannot remember a harder assignment than the one I just returned from. Standing in the West High parking lot I joined hundreds of West High students, family members and community residents in mourning the death of 17-year-old Michael Ucci.

Michael was killed in a car crash Saturday night and as word of the tragedy spread students from West High organized a candlelight vigil to remember him and pray for those also injured in the crash.

I had been to the scene of the crash earlier in the day. The accident happened when the car impacted the light pole at the entrance to West High. The crash was devastating, killing Michael and critically injuring the three other occupants of the car.

As I took photos you started to hear stories about him. He was great kid, everyone seemed to know him and like him and the grief was visible. Students and adults would come to the memorial at the base of the pole to pause, remember him and cry.

Now I have been to all kinds of news assignments: fires, floods, shootings, murder scenes and they are all just part of the job. I tend to think maybe I have become to hard at heart, as some things just don’t faze me anymore. However the sight of young people amidst a sea of grief is overwhelming and even I have my limits.

I tried to make my picture taking as unobtrusive as possible and went to the office where the pictures became part of a breaking news report on our web site. But I knew that I would have to face the grief of others one more time at a candlelight vigil that had been organized for Sunday night. I knew it would be emotional but I was surprised at what I found pulling into the parking lot.

It wasn’t a couple dozen students who showed up to mourn but a couple hundred. There were parents, friends, community members the parking lot was filled. Candlelight doesn’t provide the best photo opportunities unless you are very close so I gritted my teeth knowing I would have to the unthinkable and intrude on the grief of others.

The outpouring of grief was staggering. Everywhere I walked the sounds of sobbing filled the air. It is almost unthinkable to point a camera at a crying 16-year-old but yes to my shame I did it time and again. It is an unfortunate part of my job and one I do not relish at all.

Standing among the crowd it felt that the community as a whole had lost a son and in the chilly night air they gathered to share their grief. Man and woman, child and adults sobbed together as a pastor spoke of loss and hope and asked for our prayers for family and loved ones.

You would be surprised how much force it takes to press the shutter release, especially if wish you were miles from the sea of grief in front of you. I never wanted to make anyone feel worse and every shutter click seemed to resonate through the crowd. I have no idea if any heard it, cared about it or even knew I was there. But each and every one of the 202 exposures I took tonight hurt more than a little.

My condolences go out to the family of victims and I honestly hope no one was offended by the photography. You wouldn't think that it bothers seasoned veteran journalists but honestly we feel it too.

My college photojournalism teacher put a quote on the board one day by the famous documentary photographer W. Eugene Smith. It said, “It is hard to photograph through tears.” Those are words that haunt me today.
Posted by Glenn Moore at 9:30 PM

I go to west high. The last two days have probably been the worst school days most of us have been through. Everyone has been crying. I didn't even know Mike. Yet walking past the memorial thismorning, seeing big tough guys in tears, I almost cried myself. I have never seen most of these guys cry. i have never seen the quad so quiet and somber. i couldn't take it, after lunch i started crying. Idk why but I've been searching for articles about this. I can't stop thinking about it. I can only hope that the other people involved in the crash will be okay & stay strong, & that everyone will continue to pull together & be respectful of his memory in this time of loss.

The photos I saw were touching. Hopefully these people won't be offended. Hopefully it will be a reminder to them how precious life is.