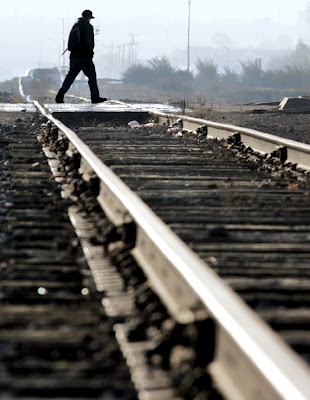 Some assignments that come through the photo desk can be frustrating to say the least. Take for instance an assignment to photograph freight train traffic that isn’t on the tracks yet. That can be a challenge.

My first idea was to find an intersection the tracks crossed and go for some kind of shot of a row of cars with the rail road sign prominently in the foreground. I found a good intersection but the sign was too high to frame in the picture without a ladder.

The next thing I noticed was the light glinting off the rails which led me to the photo I would end up using, a silhouette of traffic on the rail lines. I shot with a 300 mm telephoto lens to compress the distance and try to get the perspective of the lines going on forever into the distance. I was going to settle for a car crossing the tracks but a student walking home from school gave a better perspective of the rail lines.

I shot from a low angle and underexposed about 1 f-stop to make sure I would get a good silhouette and the rail lines would glow against the dark rail ties and bed. The hardest part of the shoot was just waiting for someone to cross the intersection.
Posted by Glenn Moore at 10:24 AM