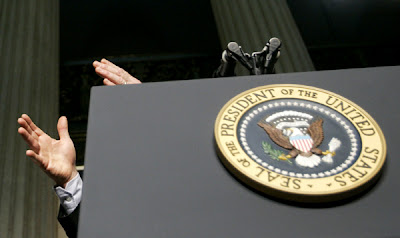 This one comes from the wire as Associated Press photographer Gerald Herbert demonstrates the quickest way to get scratched off the list of photographers for the White House press corps as takes pictures of President Bush gesturing from behind the podium as he makes remarks on the economy during an address at Federal Hall in New York, Wednesday, Jan. 31, 2007.

I actually like the shot.
Posted by Glenn Moore at 4:30 PM

By my count he needs another finger. I will give him one...