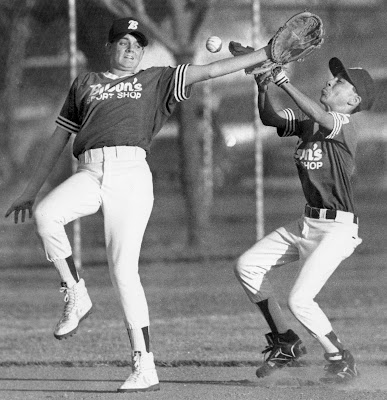 This may look like just another sports photo, but it is a good reminder for me. I shot this picture while working for a newspaper in Turlock, it is just one in a hundred or so Little League games I covered down there. It’s a nice shot of the third baseman colliding with the short stop as they both tried to field a pop fly in the infield. Nothing too special, it did win a second place in sports photography from CNPA but that not why I keep it. I keep it to remind me how bitter people can be.

It’s a photograph of error. A nice, juicy action filled-error and I was vilified for capturing it on film. How could I humiliate young children like that, what could I have been thinking? The paper, which had first played the photo big on their sports section and at one time called it a great shot sold me out and agreed I had stepped over the bounds of journalism and apologized as they wilted in the public opinion against me. I was told never to photograph an error in Little League action again, ever.
What a load of crap. 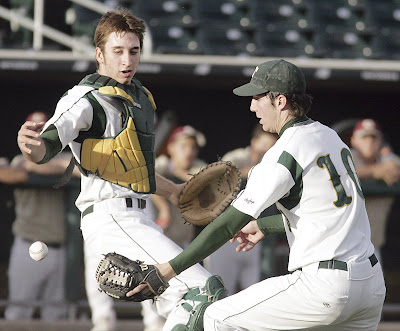 Sports photography, it’s all about choices. Where do you stand, what lens do I use, who do I focus on, it’s all about making the right choices. With the crack of the bat my choices are reactionary, following the play, watching the runners, trying to capture the action. 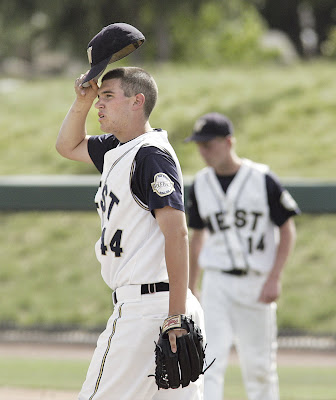 I covered the two high school’s baseball playoff games this week and honestly it wasn’t the best baseball games I have seen. Both of the teams fell behind early and would go on to lose their first round playoff games. As I covered the games I was witness to some really good action, some mediocre sports and some blatant errors. Now the obvious question is what do I do when the action is less than complimentary to the players? 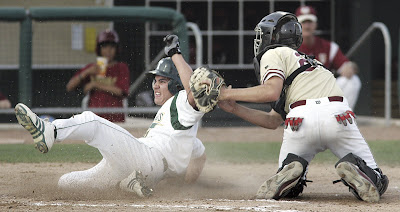 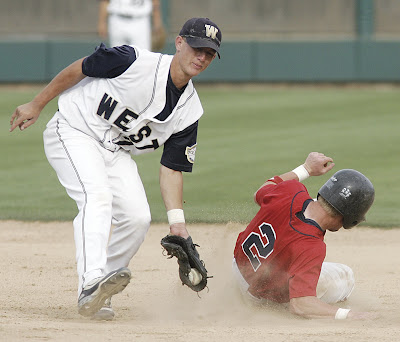 I took a couple hundred photos between the two playoffs games. Mingled in the shots of steal attempts at second base, photos of the pictures and close plays at home plate were pictures that some people might deem “negative”. A ball dropped in the outfield. A pop fly that dropped in the infield. A fielder that slipped on the outfield grass as the ball sails by. A pitcher watching a two-run homerun put his team behind on the scoreboard. I captured them all. 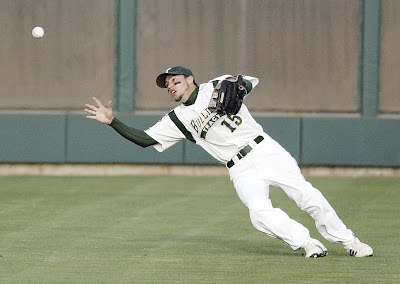 Driving home from the game I was rewinding the shoot as I thought about what I give the paper. I knew I had some key moments in the game, a player scoring at home just beating the tag, a homerun celebration that sparked life late in the game and a spectacular leaping catch deep in the outfield. I knew I had some key mishaps as well and somehow in the editing process I had to find a happy medium. What told the story of the game the best what did I need to show? 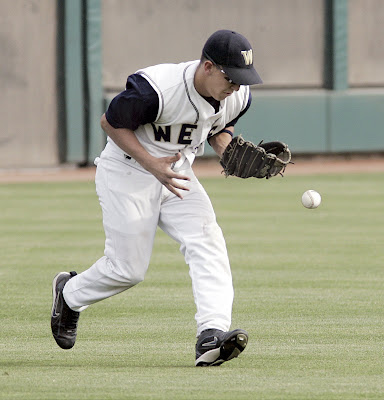 As I looked at the hundreds of photos I decided the one thing I would not let guide my choice is the fear of what someone would think of the pictures. I have been at games and heard the calls from parents as my shutter clicked not to use that photo or keep this picture out of the paper. Photojournalism and sports photography in particular is not about making clippings for family members or being a cheerleader for a team. It’s about telling the story, good or bad. Not everyone wins, someone loses and sometimes the losses aren’t pretty.
Recently I have been disturbed by the editors removal of photos from the website when a comment appears complaining about a photo. I wondered as I edited the baseball game if I selected a picture that parent might not want to see, their son making an error for instance would they remove it? In the end I chose a group of action photos that told an accurate portrait of the games. There were some high points and there was some less than memorable moments. As I write this I have no idea if these less than ideal moments will pass through the copy editor or if they will go with a neutral or only “positive” picture. 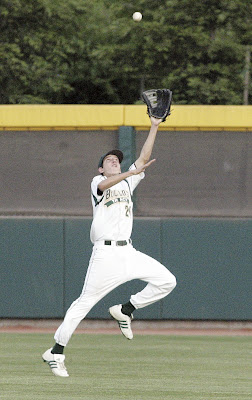 I will never change the way I shoot, I think it is a mistake to only photograph some action or pictures that will reflect a ‘positive” feeling toward a team or player. If I did that then the writers would never be able to discuss a team’s poor performance during a game or say how badly a team lost. You have to be honest and accurate in this business. If some people don’t like that so be it. I am not in this job to be popular; I am here to take pictures. 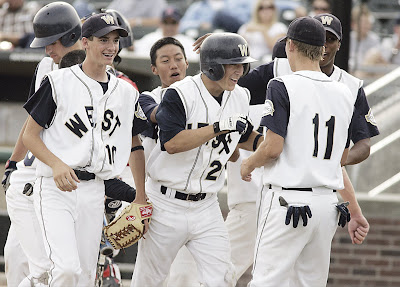 So as I look back from that simple little photo I shot years ago that made me a hated man on the sports fields to the action photos I took just a few days ago I don’t think I have changed much. I still shoot photos that I think tell the story, good or bad. It’s a choice I made to take them, and it’s a choice the readers make to think they are the wrong ones.
Posted by Glenn Moore at 11:08 PM

The camera doesn't lie, does it? If one wants a swimmingly positive depiction of a game, perhaps the players should play the Perfect Game. Isn't going to happen and if games were robotically played, ticket sales would plummet out of sheer boredom. It's the peaks and valleys that make the game worth playing and watching. The camera only catches the action on the field.

Glenn:
This "story" is outstanding and speaks to the issue of truth in general. Your camera captures truth. The Turlock paper must have been more interested in keeping people happy. "Happy" is not the goal of photographers, prophets or reporters.