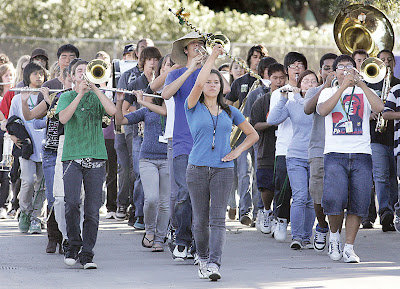 For years the Tracy High marching band practiced their parade route with a quick march down Franklin Street, a quiet stretch of roadway that usually was safe enough for the students to practice their musical footwork. 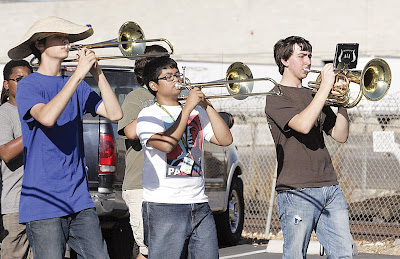 A night worker changed all that when he complained of the band's music interupting his slumber in the late afternoon. The band was banished form the street and the nearby Fine Park. With the campus construction putting space at a premium on campus the band was forced to a narrow parking lot behind the campus next to the old Heinz factory. 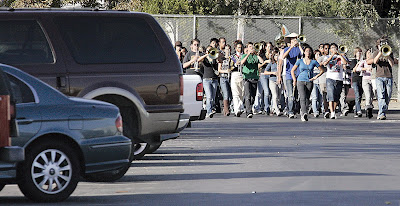 The band needs an asphalt surface to practice their street marching as they prepare for events from the homecoming parade to band reviews. The parking lot works but the narrow space keeps their formation out of shape and they are forced to dodge the drivers in a hurry to leave the campus. Not a good situation at all for the band. It would be nice if the district could find them some space where they can safely march and keep area residents happy.

I wrote a similar comment about a month ago. I just wanted to make sure you approve.

I just wanted to let you know that I am feeding your Blog into the Tracy, CA Facebook Page I created a more than a month ago. I hope it's OK. You can see it in the Notes tab, but published to all members' Walls everytime.

It has ballooned to about 1,400 members. It would be nice to see your credits at the bottom of each article :) Some member are asking who is writing the nice articles. I do have a short paragraph about you in the About Us tab, but no one reads it.