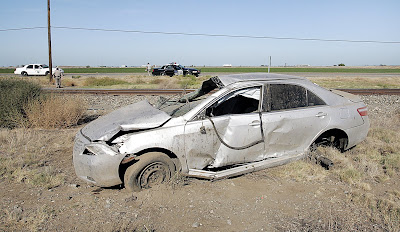 This was one of the assignments where the end result could have been much worse. The call across the scanner was for a single car rollover on Highway 33 south of town. 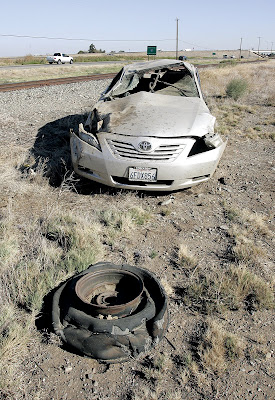 Highway 33 can be a bad stretch of road for accident. Speeds can be high, one lane of traffic each direction means not a lot of room for error. I have covered my fair share of fatal accidents on the stretch so I headed out on the first dispatch. 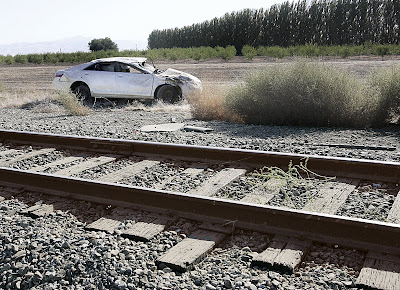 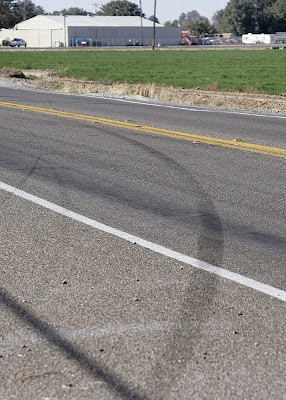 About halfway there the call came back that the car had rolled multiple times but the driver was standing outside of the car. I kept going to see how bad the damage had been. Arriving on scene the car, a Toyota Camray was sitting upright well off the roadway facing north on the opposite side of a railroad track running along the highway. 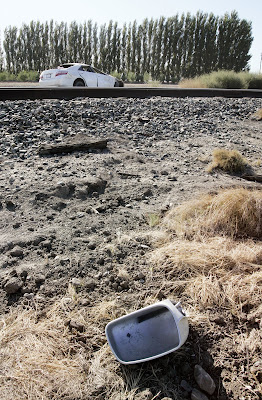 Skid marks showed the path where the car travelling south abruptly made a hard right turn from the roadway into the dirt shoulder where the soft dirt grabbed it and sent it tumbling. At some pointy it struck the railroad tracks and continued bouncing where it finally wound upright facing the opposite direction it had been travelling. The only occupant of the car the driver had a cut on his head and was transported to the hospital for the minor injury. 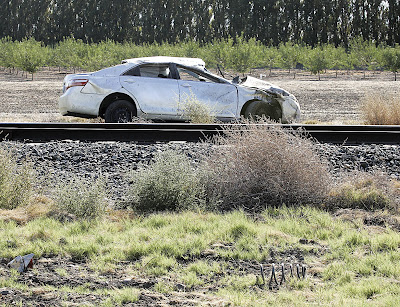 Car parts and glass were strewn on and around the road shoulder and railroad tracks marking thee cars flight of the roadway. The car was severely damaged, a wheel was ripped off in the tumble but for the driver to be for the most part uninjured is a sign why seatbelts should be used. It was a lucky break for this driver to have escaped serious injury in such a crash and reminder to be careful on those country roads.
Posted by Glenn Moore at 5:18 PM