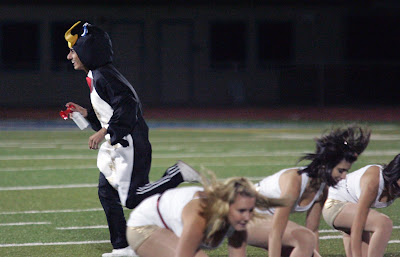 Of all the things I could ever shoot I never thought I would be standing on a windswept football field at night watching a guy dressed as a giant penguin with an air horn running around in circles. All I wanted was something interesting to shoot. Ask and ye shall receive.

Some people think newspaper photography must be some kind of glamorous job. Shooting professional sports, on assignment to distant countries and the dazzling lights of Hollywood. Sure that’s what it looks like on paper but things are a little different in Tracy and Wednesday night I found myself at Steve Lopez stadium for West High’s night homecoming rally.

The wind and chilly night temperatures kept the crowd down and I was just hoping for a quick rally. I have covered the West rally in past years and I knew what to expect. A few dance performances, some skits, maybe a contest or two and the crowning of the homecoming royalty. But about half way through something odd happened. The penguin appeared. 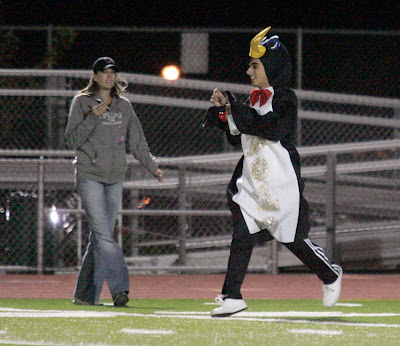 At first I honestly thought it was part of the rally. It is close to Halloween so I didn’t really pay too much attention. But as the West High dance team took to the field for a performance what I guessed was a student dressed in a penguin costume carrying an air horn ran onto the field. He started circling the cardboard cityscape the rally organizers put out as part of the rally. He kept hitting the air horn as the dance team performed and he ran around the field. After about his second lap I started to notice that tell tale sign that something was up, school administrators started creeping onto the field.

I guess it was a rouge penguin. He started to change his course and circle away from the school officials like a penguin on the ice flow as he tries to avoid the pack of polar bears closing in. Now homecoming rallies aren’t the most exciting thing to shoot so I started hoping for some real action out of this. Maybe one of the administrators would try to tackle him like security hits streakers at a soccer game in England. Or even better maybe they would call the police. Then an officer could deploy the taser to take the uncooperative penguin into custody. That would have been cool; a giant penguin in sweat pants twitching uncontrollably on the field as a puddle of drool flowed from his beak. Yeah that would have been nice. 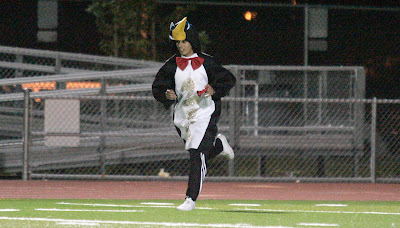 But no such luck. He surrendered to school officials who walked him out of the stadium as a chant of “let him go” echoed from the bleachers. The rest of the rally moved quickly with the king and queen crowned to the cheers of the crowd as the finale to the evening. Walking back to my car I kept an eye out for the penguin but he was long gone to that place where penguins go when they waddle to close to the sun. That or maybe he had to return his costume.
Posted by Glenn Moore at 10:42 PM