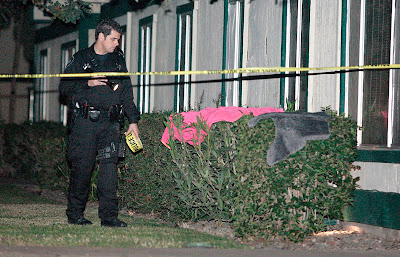 I am still trying to figure out what went wrong. Standing behind crime scene tape tonight I still keep asking myself what happened? How did things apparently get so bad? When did it all go wrong? What happened?

I was in the newsroom waiting to leave for a basketball game when a call came across the scanner for a man shot at the Tracy Garden Apartments. Before I had made it out of the building they upgraded the call to ask for an air ambulance to take the victim to the hospital. Halfway to the scene they called off the helicopter and decided to take the victim by ambulance to the nearest trauma center. A 26-year-old man had received two gunshot wounds to the chest. I knew the basics of what happened to the victim but I had no idea what has happened to our city.

I am not naive, I know there is crime in every town big and small. In the past Tracy has had it's share of big city crime from bank robberies to sexual assaults to murders. What I have seen this year is nothing new to this town. It just seems the quantity has overwhelmed us.

I remember last December waiting in the courtroom to watch the arraignment of four suspects accused of torturing a 17-year-old boy and thinking this is the worst this town will ever get. Then a few months later waiting for the announcement that Sandra Cantu's body had been found I thought things couldn't get much worse. And tonight waiting for a press release from the Tracy Police department I wonder how bad it can get in the few remaining days this year.

Three Hispanic males in a dark SUV drove around town this evening shooting in random neighborhoods. At the Tracy Garden Apartments they shot a man twice in the chest then drove to another part of town and fired some more shots. What happened? How did this come to our town? That is the question I keep asking.

Some know-it-all commentors on the Tracy Press website blame our problems on the influx of Bay Area families into our community. Some blame a lack of effort by law enforcement. Others cite the racial makeup of those accused of the crimes. It's a bad economy, our congressman doesn't care, its the aliens over south Tracy. I am sick of it all.

I don't have any idea why there has been such a spike in the violence this year. It bothers me, who wants to drive to the scene of a homicide? Who wants to watch family members grieve at a candlelight vigil? Maybe this is the same level of crime that has always been here and we are just more aware of it now. I am not sure. Sometimes I feel numb to ugliness and hatred I see. I am becoming accustomed to a life behind the crime scene tape. Get the shots of the yellow tape, look for blood stains and head back to the office. I sometimes think I am living in a sewer like Stockton or Modesto, shooting crime scenes through the grates that lead to the sewer's depths.

I know I am bothered more by the crimes of late. I fear for my parents, I worry about friends and the neighborhood I live. It is a terrible thing to live in fear. People living in fear expose their hatred and racism, the ugliness we see in the comments on a daily basis. And that can only lead to more divisiveness in our community, more hatred and even more anger. I saw a comment on the shooting story posting for the Guardian Angels. What's next, vigilantes? Nothing good can come of violence or reaction to it.

Stuff like that has been happening more in my town...i think it was just last week