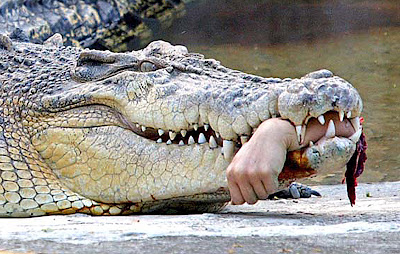 We received a handful of calls regarding the now infamous cat and mouse photo that appeared on Thursday’s cover. Some people found it gross and disgusting, not wanting to see it over breakfast. Actually I don’t find the photo offensive. Some people may think we have no standards but quite a few photos come across my desk that I know will never see the light of day in the paper. Steve Chen’s photo of a crocodile attack in Taiwan that ran on the Associated Press wire does push the limits and did not appear in our paper. I guess it is a matter of how much blood and graphic content is visible determines if it fails the paper’s Cheerios test. And by the way the crocodile did cough up the arm and it was reattached to the victim.
Posted by Glenn Moore at 12:45 PM