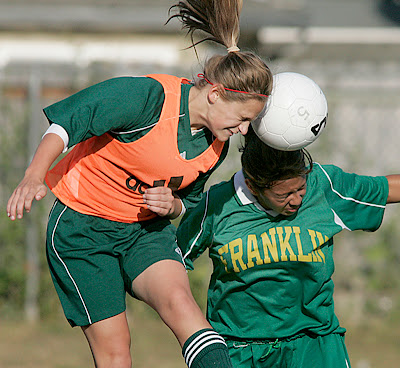 The high school sports season is winding down as teams prepare for their playoff runs.

Tracy High was playing their last schedule match of the year and I set up a shooting position near the goal box. Shooting with the 300mm with 1.4x extender gave me a tight shot on the action at midfield.

Soccer is one of those sports where you have to anticipate the action if you want to capture. You get used to watching the eyes of the players to tell when the ball is heading toward them. A fast motor drive, good timing and anticipating where the players are moving can lead to a good shot.

I followed the action on a corner kick as the Tracy High player jumped in to try to steer the ball into the net as the Franklin High player defended her. I got lucky and captured the clash of heads as they met at the ball.
Posted by Glenn Moore at 10:33 PM