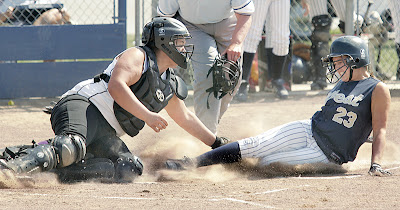 Fighter pilots are a rare breed. In the heat of battle during their dogfight they have to factor a number of variables in to their battle from the maximum speed of their foes airplane to the wind direction in case they have to bail out. All these facts and figure floating about their minds while they fly makes for a busy time. Keeping track of all these items is often referred to as situational awareness. In short, you have to pay attention to what going on around you.

I was shooting the west high softball game today and I had my own equations going on. Here were my two views of the action unfolding.

I was shooting form the third base line side of he field as West high advanced a runner to second. Now with a runner in scoring position my options are shoot from third base line to get a view of any play at third with the possibility of the batter reaching second on a play but I can’t shoot a scoring play from this position as I will only get the West high player’s back.

Now I could change shooting positions to the first base line to get the runner at second if she tries to score along with a view of a play at third from the side as well as a batter shot but then I lose any type of play at second base on the slide but since I am still in early inning action I could always change back for a play at second and the action potential home plate is better.

I had until the next batter left the dugout to run those two scenarios through my mind. I hustle to the first base line just in time to capture this collision at home. Situational awareness, it really works to pay attention.
Posted by Glenn Moore at 7:44 PM