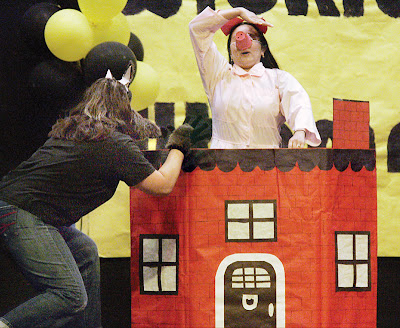 There are those moments on assignment when your realize things are starting to slip beyond your control. There is that moment when the compass needle starts to swing during your shoot. It’s about that time your realize your assignment is heading south and you try to hold on for dear life.

I had one of those assignments today and it always happens at the most innocuous of settings. I was at Wicklund School for a talent show and I was in for a few surprises.

The teachers at the school are presenting the Wicklund Whammys, a kind of faculty show mingled among the student awards ceremony. My first clue things were slipping was the rock version of “the Three Little Pigs”. It was pretty cute but then I had to get names of the singers. When is the last time I went up to a woman who is a total stranger and asked her, “So are you one the pigs?” 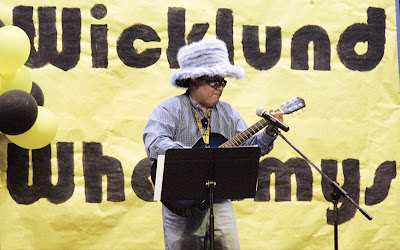 So then comes the scat song. Yeah, a song about fecal matter. It was kind of catchy, a guy in a big fuzzy hat was singing along and there I was wondering why anyone would make a song about deer droppings. I am well on my to the southern hemisphere. 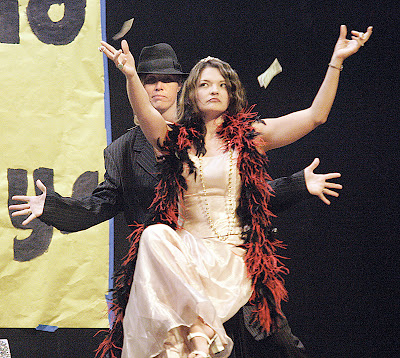 Ok so the next act can’t be too bad. It is a couple of women dancing with feather boas. I start taking notes to get names later. So I can identify people later I make note of what they are wearing. The list reads like this: Woman with red boa, woman in leather boots, woman dressed like a man. I was later told she was supposed to Ludacris and another was some singer named Fergie and they were doing a song called “Glamorous”. Why can’t anyone do a Fleetwood Mac song I could recognize? 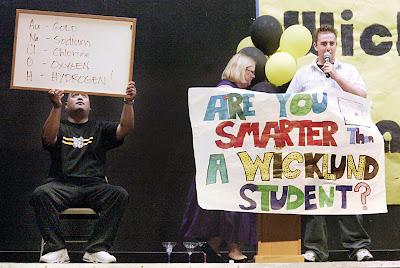 So now the next act up is a game show based on some television program. “Are You Smarter Than a Wicklund Student?” brought the principal to the stage for a quiz challenge against some students. It was cute; they even through a few “redneck” style jokes just like the television show. Ok the needle is pointing due south and I had to run so I headed back to the office and all I could think about was someone actually took the time to write a song about scat. Thank goodness I couldn’t remember more of the words.
Posted by Glenn Moore at 8:27 PM

I'm so proud of you for spelling Ludacris' name correctly. Truly, Glenn, you don't have to be out of touch. Just turn the radio dial from "all-Fleetwood-Mac-all-the-time" to 93.1 or 95.1 on occasion and you'll hear "Glamourous" and so much more.