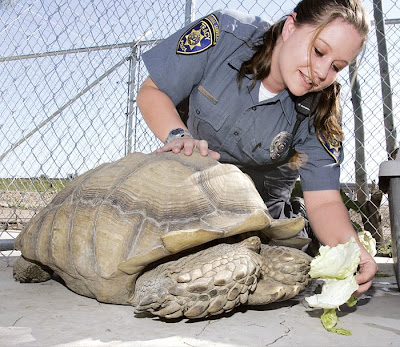 Why do animals hate me? That is a question scholars will ponder for years. I used to think it was just dogs, the occasional cat, maybe a horse or two and even a rabbit. But low and behold nature’s dislike of the camera extends to even the most unusual of Gods creations, case in point, the sulcata tortoise.

Forget the fact that a 200-pound tortoise was found wandering along a Tracy street and was scooped up and taken to the Tracy Animal Shelter. What was strange was how ornery a tortoise gets when you try to photograph it.

Large and lumbering you know a tortoise isn’t going to run you down. But what he lacks in speed he makes up for in ill temper and no cooperation. 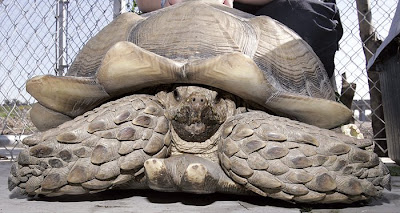 So how hard can it be to photograph a tortoise? Plenty hard. First of all as soon as it smelled my camera coming near it retreated inside the shell. A playful knock-knock on his shell was greeted with a hiss that made me wonder if he was one of those tortoises that can snap a tree branch in half with his beak.

So maybe I can coax him out with a leaf of lettuce? No luck, just hissing. Maybe he likes wilted lettuce better? A louder hiss and he would waddle away as best he could inside the kennel cage that is his temporary home.

So I abandon all hope of catching his face outside the shell and just plan to stick the Canon Eos 1D as close as I can to those leathered legs and hope I catch his face. I am greeted with the now familiar hiss and an attempt to turn his butt to the camera. I think he had been talking to the dogs in the kennels next to him and got some advice on how to act in front of the camera. 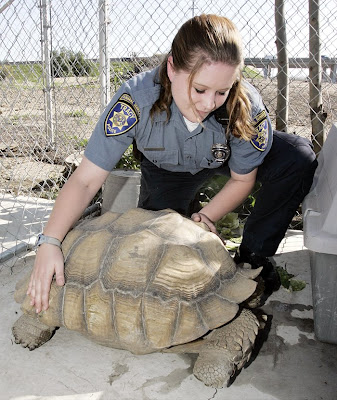 I just can’t figure it; I have no luck photographing animals, no matter the size, shape or species. From dogs to tortoises, it is always an adventure behind the camera.
Posted by Glenn Moore at 9:16 PM

I love this story but don't be done when one starts in a shell it is a hard thing to break out and be outside the shell.

Wow! You need to right a book on your crazy animal experiences. How many people can say they have had such fun? Between Catzilla and this tortoise, you have had a wild time!