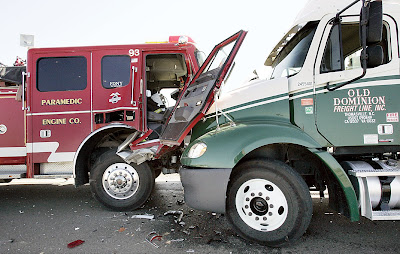 I was driving to the report of a small grass fire just outside town on Highway 33. The original call was a little vague a report of a fire somewhere on Highway 33 near the junction with Highway 132 or somewhere between that and Durham Ferry Road. I could see the smoke billowing in the distance and it seemed hardly worth going as the first engine on scene, Engine 93 reported a small fire on the railroad right away, about 300 feet of fire fed by light flashy fuels. I was debating whether to turn around as I neared the Bird Road turn off to head toward Highway 33 when the radio sounded with the frantic call “3 is hit, 3 is hit”. 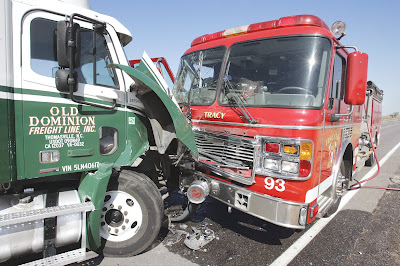 Somewhere in the blinding smoke engine 93 had taken a direct hit from the traffic still on the roadway. I had a sick feeling as I turned onto Bird Road and gunned the engine. Scanner traffic was getting overlapped, Calls for e CHP to expedite for traffic control, someone asking for injuries report and then more fire engines responding to the scene. 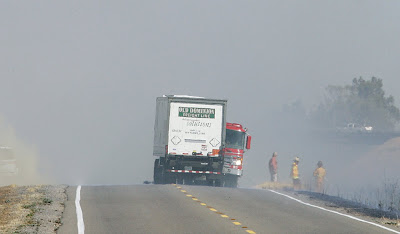 There was a pause and a call that there had just been another accident. There was a call to close the road to traffic. I raced to the scene and fell behind the line of cars trying to turn away from the scene. Up ahead I could see the smoke drifting across the road obscuring the scene. 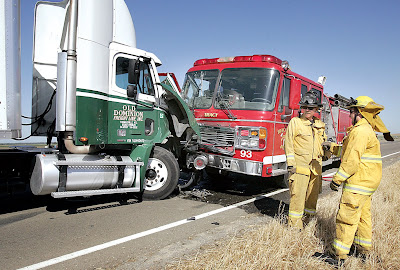 Walking up to engine I was relieved that all the fire crews were surveying the scene, no one looked injured. At the wreck I found Engine 93 had taken a head on collision from a semi-truck that tried to drive through the blinding smoke. Engine 93 had pulled to the right hand roadway to fight the fire and the semi collided with the fire engine at an estimated 25 mph. No one was aboard the engine at the time but the three crewmen were standing no more than 4 feet away from their fire engine was struck. All had just averted a tragedy. 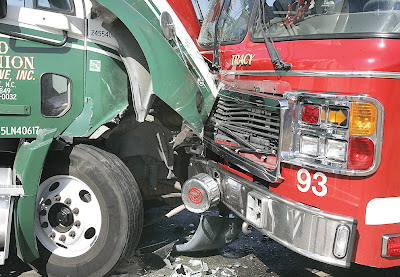 I have seen one crash involving a fire engine before when a rescue truck from the Denair Fire Department was crushed by a another vehicle in thick fog outside Turlock. This crash seemed eerily familiar and luckily as in before no one was seriously hurt including the semi-truck driver.
It seemed common sense to me that drivers would pull over when the visibility reached zero but maybe that is just me. I have been to some dangerous news scenes and I always have my head on a swivel to watch for traffic and the occasional careless driver speeding through the scene.

It was a good reminder for all to be careful at such scenes and to pay attention for those putting themselves in harm’s way. It will be a little while before I can get the sound of that radio call out of my mind.
Posted by Glenn Moore at 6:13 PM