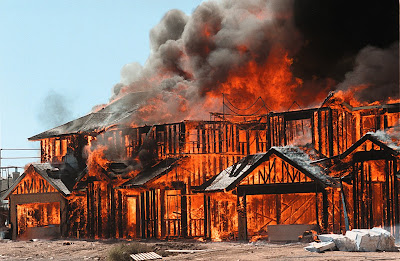 I knew this was going to happen sooner or later. I know I am getting old by the tell tale signs like the gray hairs on my arms or the Ben Gay I rub on achy joints after a hike. But another sure sign of my old age surfaced today. I was getting the photos for this week's Our Town section ready when I spotted a familiar picture for the Remember When feature. A fiery blaze on the south end of town one August morning. The Pebble Brook fire. My photo from ten years is the Remember When feature.

Yep I'm old. Been at the paper for going on 12 years in October and that fire was one of a string of big fires I have covered. There was the tire fire, the Phoenix Lodge, the old Plunge, the list goes on and on. I remember driving toward the black plume as it gathered fuel consuming five nearly completed homes after a careless plumber started the fire brazing copper pipe. 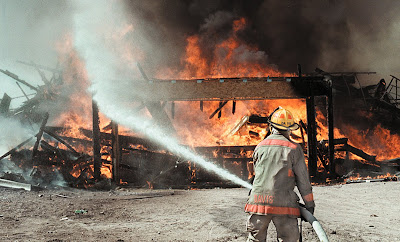 The scene was like no other fire I have been to, five homes engulfed, the sound of the wood crackling in the massive fire and the heat radiating out was unbelievable. I remember shooting pictures and then ducking into a garage of a not quite finished home across the street when the heat grew too uncomfortable. it was shoot and then back up. go and shoot and then back up, it seemed to go on that way for a long time. The first arriving fire crews raced to either end of the blaze to try and keep anything not yet burning from getting started. I was alone in the middle with the flames for a little while until more units arrived on the multiple alarm fire. 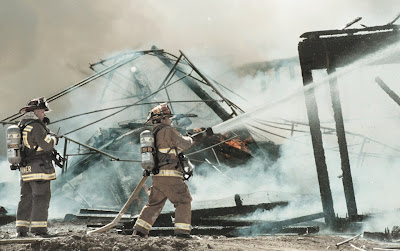 The thing I remember the most was the foam insulation was melted off the front of the home I was standing in front of to take the pictures. Someone later told me the foam melts at sustained temperatures of 300 degrees and higher. Yeah it was a hot one for sure.
Posted by Glenn Moore at 9:14 PM