Lost in the whirlwind grand opening of Kimball High is the continued remodeling of the Tracy High campus. Crews began demolishing buildings to make way for a new library, cafeteria and classroom complex. The old structures were torn down the debris removed and now land grading and site preparation is underway. 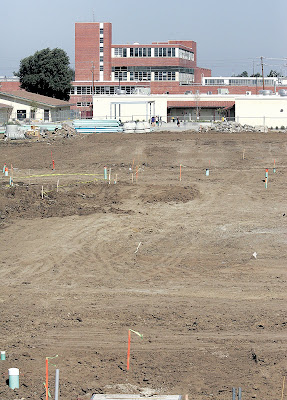 It is mixed feeling as I watched the buildings I went to school in reduced to rubble but even way back in the early 80's the buildings were already showing signs of wear. Covering a football practice I grabbed some shots of the empty lot now waiting for construction. It will most definitely be a different feeling as the new buildings take shape over the next months.
Posted by Glenn Moore at 1:16 PM