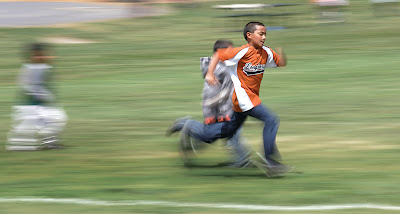 This photo was the discussion of some good natured ribbing around the newsroom.  Everyone was happy I took this blurry photo to go along with a story about an elementary school's fitness race program.  It's nice to know I can take a blurry photo and still gets into print, but it is actually harder than you think. 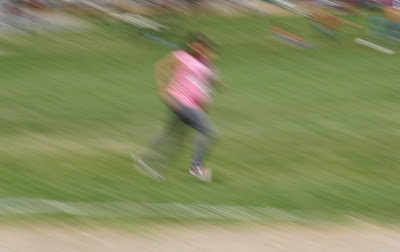 So this is basically a straight pan shot.  While it is blurry I like to think of it as a controlled blurred.  We use panning to give the reader a sense of speed of the subject.  Basically it is just selecting a low shutter speed, following the subject as it travels parallel to the camera and making the exposure while you track the subject.  The tricky part is shutter speed selection, panning speed and the subject's speed.  All need to be just right to get the proper effect. 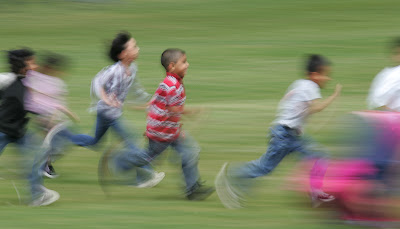 To get the picture at top I took 208 exposures.  Most of them were throw aways-not enough motion blur, too much motion blur  or it just didn't look right.  Maybe the end result was just too busy.  I was lucky that I had about a half an hour of kids running continuously so I could try different shutter speed and panning speed combinations to get the right effect. I first shot a couple of standard running shot so I would be covered with usable art in case the blur effect failed miserably. 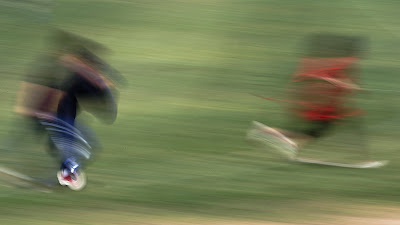 The key to getting a shot like this is speed.  You have to have a subject that is really moving so I waited for kids who were in dead sprint to pass by.  Next is a suitably slow shutter speed.  That meant cranking down the ISO setting on my Eos 1D MKII to the Low setting which is 50.  A small f stop would then force a slow shutter speed selection, I was working around the 1/15 to 1/50 of a second range.  For the image to work you have to have something sharp and in focus in the frame otherwise it is just a wash of color and too abstract. 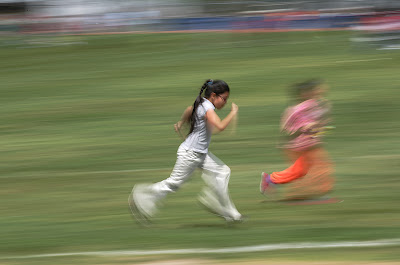 I was shooting with my 70-200 mm zoom lens and would shoot some frames then chimp the results, gauging if I needed to crank up the shutter speed or slow it down.  The panning speed of my camera was a wild card in the process so I shot a lot hoping I would get a couple that worked. 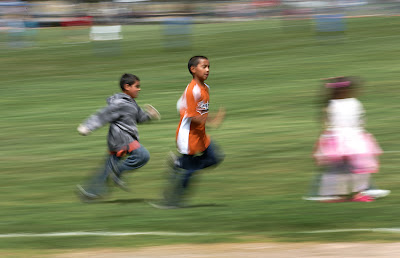 The best shot wound up being with a shutter speed of 1/20 of  second with an f stop of  f.20.  I wasn't too concerned about the depth of field as the background would be a blur.The result is a photo that has a enough blur to show the speed of the kid running around the track while still having the face be sharp enough to see who he is.  It  just goes to show a blurry photo can be the best idea for the story.
Posted by Glenn Moore at 12:00 PM