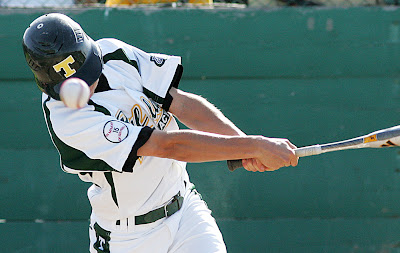 I had one of those "oh shit" moments the other day shooting the Tracy high baseball game.  I was shooting from along the first base line when a batter connected with the pitch, fouling a line drive screamer above my head.  It was a little too much like last year knock in the noggin from another foul tip.

On this shot I heard the ball impact the bat and saw as the ball heading straight toward me.  Putting all thoughts of looking cool aside I flinched and ducked as best I could as seconds later the ball hit the metal bleachers behind me with a clang.  The scary thing was shooting with the 300 mm lens my field of vision is pretty narrow so I lost track of the baseball quickly.  My last sight of the ball was it heading toward my lens with some speed behind it.  It was probably a good distance above me but I am still a little gun shy standing on the field.  I probably have a better chance of getting hit by the ball during the between inning warm-ups than I do during the game action.
Posted by Glenn Moore at 5:58 PM