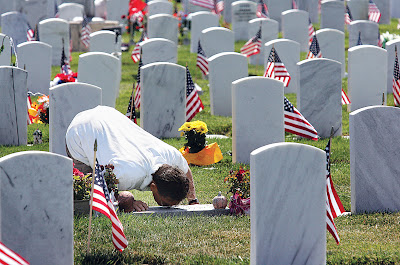 I was on assignment today covering the Memorial Day service at the Tracy Public Cemetery when I heard something that made me think.  The ceremony was done, the speeches were finished, the echoes of the rifle volleys fired in salute to the honored dead had faded away and the sound of Taps waned in the wind fluttering the hundreds of American flags placed around the cemetery grounds.
I was heading back to my car and I stopped to take a few last pictures of the Little Arlington section of the cemetery.  This is an area reserved for veterans and their family and one man stood there patiently waiting for me to finish taking pictures.  I took the camera down from eyes and watched as he walked among the rows of grave markers to one and then knelt down in front of it.  He paused for a moment, placed his hand on the marker and then knelt down and kissed the marker and turned to leave the cemetery grounds. 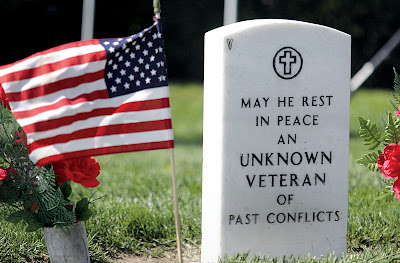 I felt bad for a couple of reason.  First I had inadvertently made this man wait to pay his respects to a family member or friend I thought.  Then as I watched him make the visit to grave marker I took his picture.
I know it may sound dumb but I felt bad about taking the picture.  It was a quiet moment, a private moment of remembrance and I felt I had intruded.  I caught up with the man as he headed for the parking lot and introduced myself.  He already knew me and I remembered him.  His name was Charlie Norton, a Vietnam veteran who wrote a column for the Our Town section of the newspaper about dogs called Paws for Thought. 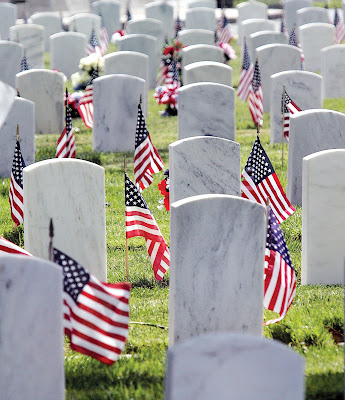 I told him I was sorry I didn’t mean to make him wait t and asked him who he was visiting.  He said it was his wife Betty Jean who passed away four years ago.  I told him I was sorry to hear of his loss and he said it was all right, talking about her he said she was a true Marine’s wife.  As we were walking he said the thing that left me thinking all day long.  Heading out looking around the cemetery grounds he said it was just Fiddler’s Green.
Now I thought I misheard him but he was trying to explain the term, it was where the soldiers go when they pass on.  Later I looked up the phrase and found it referred to a view of the afterlife where there is happiness where a fiddle never stops playing and the dancers never tire.  In the military cavalry units use the phrase to memorialize the dead and it is part of the Cavalrymen’s Poem, one verse goes as follows;
Halfway down the trail to Hell,
In a shady meadow green
Are the Souls of all dead troopers camped,
Near a good old-time canteen.
And this eternal resting place
Is known as Fiddlers' Green.
I have thought about this all day and not really sure why.  Today on Memorial Day we remember the service and sacrifices of the men and women in the military.  Those who gave their life in service and defense of this country are inscribed in our hearts and minds forever.  The losses are more than we can ever imagine for their families and loved ones.  And then there are those who still serve, protecting borders, putting themselves in harm’s way day after day without thanks.  Putting burdens on their family and friends who pray and wait for their safe return.   And sometimes it doesn’t happen. 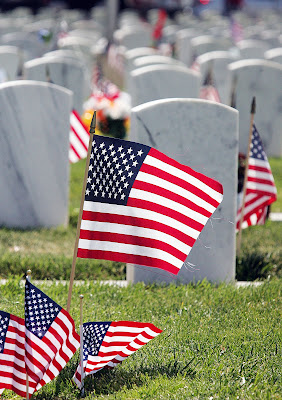 Fiddler’s Green.  I imagine rolling hills with a soft warm wind blowing across it.  Flags unfurl in the breeze as the music wafts through the air.  And these soldiers-young and old alike- who fought to defend our freedom, those men and women who sacrificed so much for us, who suffered so much for us, taken from us can dance again with their loved ones in the warmth of the afternoon sunlight one more time.  I hope there really is a Fiddler’s Green somewhere for them, they deserve a chance for rest.
Posted by Glenn Moore at 9:49 PM

Thank you Glenn, for your photos and story. I appreciate your telling about the Fiddlers Green.

Glenn, this is stunning. Thank you for sharing. I'd never heard of Fiddler's Green. It's also great to get a glimpse of Charlie.

Such a lovely post, Glenn. Cheri always said you brought excellent writing along with your photographic expertise.
Sometimes the turn of a phrase, like Fiddler's Green, arrests our attention and we don't know why. Make it a point to find out why, Glenn. You'll be rewarded for the pursuit.