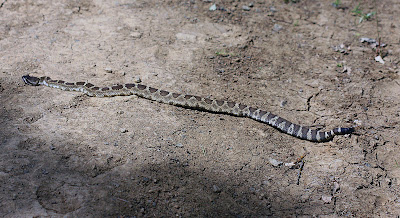 There's a great scene in the movie "Apocalypse Now" where Frederic Forrest playing Chef runs through the jungle back to the boat after he and Martin Sheen stumble upon a tiger while foraging for mangoes.  He looks at his crew mates and shout " I gotta remember, never get out of the boat!"  I guess I should have remember something similar- never get off of the trail.

Just about five minutes into our hike at Mount Diablo today I had an idea.  A dumb idea as it tuned out to be.  We were heading along Donner Canyon Road from the Regency Drive gate when I decided I wanted to get a close up of the water rushing through Donner Creek that sits nearby the trail.  There is a large amount of tall grass sitting between the dirt trail and and the creek so I made my way through looking down and as I neared a patch of taller grass I was getting ready to take another step when I noticed lying coiled up in front of me about two footsteps away was a rattlesnake. 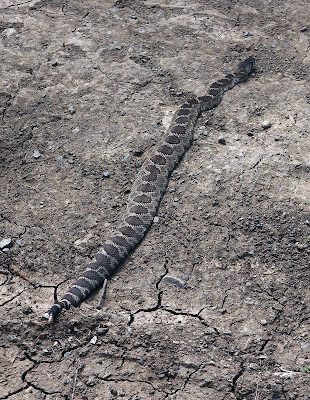 Yeah it was my fault and at least I had the common sense to look down as I walked through the grass.  The little guy didn't hiss, rattle or move.  I froze in my tracks in mid stride with that "oh shit" feeling welling up in my throat.  I debated for about a half  second about stopping to take picture but then common sense kicked in and I made a slow and careful retreat back to the trail.  My hiking partner Alice knew something was wrong when she saw me stop suddenly and I did eventually call out rattlesnake.  Nothing like getting your adrenaline flowing early on into the hike.

We were thinking that would be our only excitement for the day and on our return leg at about the half mile mark from the Regency gate we stopped by a woman hiker just heading out on the trail.  She asked us if we had seen a rattlesnake on the trail, someone had passed by her and gave her a friendly warning.   We said no except for the sighting early that morning.  I turned to tell the woman as she walked away to stay in the middle of the trail and Alice started to walk toward the gate when she spotted the second rattlesnake of the day stretched across the trail just about two feet from us.  The woman had passed by the snake and stopped us right next to it to see if we saw it. 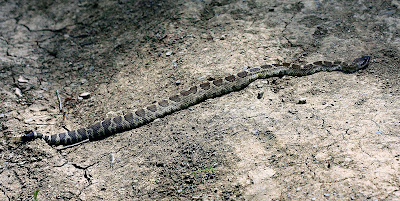 So with hiking poles ready we carefully walked around the snake from the tail end.  The snake was content to lie in the cool dirt trail as it looked like he had recently dined on a mouse or small rodent.  We stopped for some pictures and to count the rattles on his tail as we watched his tongue dart in and out as he smelled the area for any one nearby.

We shouted out to stop a group of young hikers heading toward the snake to warn them.  We talked them through their way around the resting snake waiting to we made sure they had all passed by safely.  Heading on to the car we were startled to see a third snake on the trail but relieved to see it was just a garter or gopher snake as he quickly slithered off the trail at our approach.

This rated as a three-snake-hike, the most I have spotted on any hike so far.  The rocks and grass of Mount Diablo are there favorite territory so it is with a wary eye we make our way along the trails there.  And that is why I carry a first aid kit and snake bite extractor kit when we hike.  Never leave home without them. 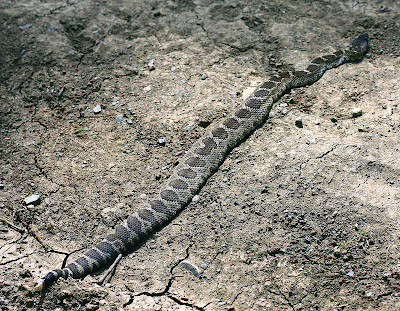 I woulda stepped on one of those snakes. And you carry a snake bite extractor? Scary stuff!