The Year in Review: The best photo that never ran 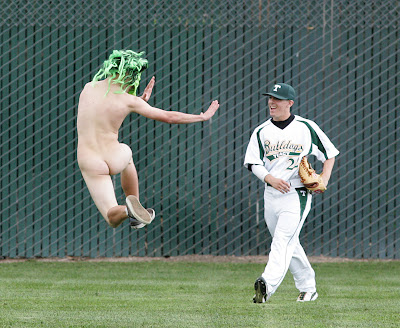 I knew this photo didn't have a snowball's chance in hell of making the paper as soon as I tripped the shutter.  I was covering a Tracy High baseball game when something odd happened...

I was shooting from the third base line and had my camera focused on on the pitcher when the home plate umpire called a balk.  I remember seeing people moving out of the corner of my eye from behind the camera and wasn't sure what was going on.  Seems like the pitcher stopped his motion when he caught sight of this "fan" running on to the field.  Buck naked wearing a mask and some kind of weird wig he ran around the infield before heading out to left field.

I didn't pull the camera trigger as he passed by from the front, no way Jose.  Even I have standards.  As he cruised into deep left field it looked like the outfielder might be setting up to try and tackle this idiot.  Instead the streaker did some kind of weird hippie-hop dance and I had my shot.  The guy then climbed the chain link fence straddling the top where he waved to the crowd before jumping down.  I can only imagine what kind of nasty spiders and bugs were lurking in that ivy as he climbed up in the buff.

So yeah I had my streaker shot which was destined never to see the light of day anywhere but on my blog.  It ranks as one of the stranger sports shots I have ever taken in my career.

And what was the count on the batter?  I think it was two balls, no strikes.
Posted by Glenn Moore at 11:26 PM