The Year in Review: The best photo of the year 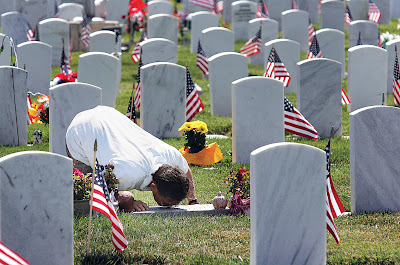 Looking back over the year one photo stands out in my mind what photojournalism is.  It wasn't a photo from a fire with flames leaping toward the camera.  Nor was it a crime scene with a shell casing laden roadway marked off in crime scene tape.  It was a very quiet photo that I took by accident on a quiet Monday morning.

Walking back to my car after covering a Memorial Day ceremony I took this photo of Charlie Norton giving a kiss goodbye the grave of his wife Betty Jean who is buried in the Little Arlington section of the Tracy Public Cemetery.  I don't think this photo ran, the editors were a little leery about the emotions in the photo but I think it says so much I can't help but like it.

Yes I felt bad about taking it, one of  the many photos I've taken that have given me pause to think about the effect it may have on the subject and others.  It is a hard thing to have to juggle emotions, news value and my own sense of a moral compass on assignment then make the decision in just a second.  I chose to take the picture and even though I have had some twinges of second guessing my decision I think the photo speaks volumes.

I look at this photo and when I see the never ending love of a man for his wife.  I see the dedication of my dad carrying for my mom in her illness.  I see the memory we keep alive to those who have passed and I see a spirit that can't be shattered by loss no matter the distance.

I talked to Mr. Norton after I took the photo and he told me a story about "Fiddler's Green" a place where soldiers and those who have died can rest in peace among green hills and music as they never tire from their dancing.  I wrote about our conversation here.

It has been a hard year for many of us.  We lost community leaders including Tom Hawkins and Pinkie Phillips and I try to remember the last time I took their photos and what I said to them.  I always wonder did I say the right thing, was I kind enough did I leave them better than when I found them.  Personally it has been a hard time losing my uncle just days before Christmas this year and dealing with a family crisis for most of the year.

Everyone always says it is better if people die if they were suffering, I guess it is true, I would't want anyone to be in pain or to suffer.  After my conversation with Mr. Norton I came to hope there really is a place like Fiddler's Green where weary souls or those in pain can find comfort in the music of another life.  I think about that a lot in times like this.

It may not be the most exciting image but the message and story of this photo tis the world to me.  In my photo files I named this photo Fiddler's Green and when I'm feeling down about things or thinking that road ahead is too hard and filled with pain I think about the story of Fiddler's Green and things just don't seem as bad.  One moment in time, one image, one story and so much to tell.
Posted by Glenn Moore at 10:40 PM