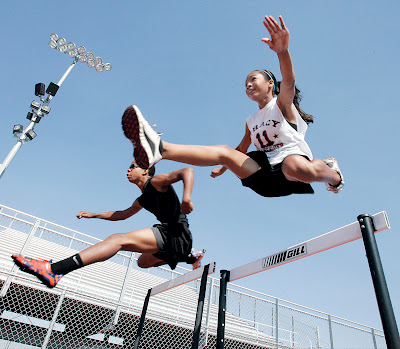 I've said it before but it bears repeating, one of the easiest ways to make a photo look different than all the rest is to change your shooting angle.  A change is altitude can give your photos a whole new attitude.  Take my assignment this morning for insistence. 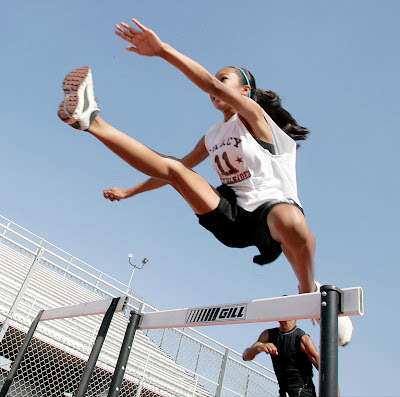 I was working on a track club feature and among the runners was a pair of hurdlers.  Now I shot the standard long telephoto lens view down the row of hurdles but I wanted something different, a little more dramatic.  I decided to shoot from beneath the hurdlers as they crossed the bar. 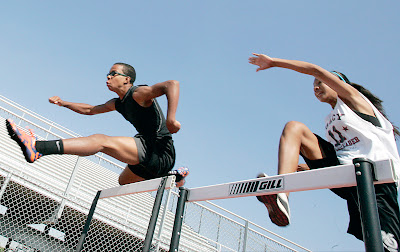 With my 16-35mm lens I stretched out on the track next to the first set of hurdles.  My viewpoint would have the camera tilted up from the track about a foot and a half away from the hurdle.  This helped with two things; it gave me a new and exciting view of the action and it helped clean up the background as much as I could.  it helped keep the readers attention on the runners go over the hurdle. 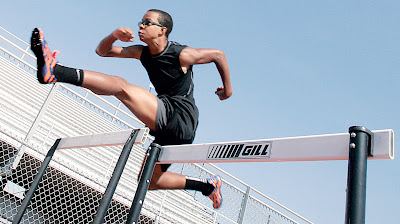 Timing was the issue I could sort of see them enter the frame and as they began their jump I held down the shutter for a sequence.  Remember the rule is you shoot into and out of a sports action scene.  I would be too late if I tried to trip the shutter as they crossed the bar.  I had the hurdlers run through the drill a couple of times until I was satisfied I had a good look at the action. 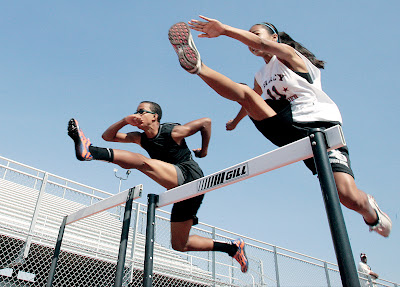 Looking back I should have carried a little more shutter speed, I am on the edge of a little motion blur.  Remember that action moving parallel to the camera is the hardest stop as well as being so close.  Still I have a couple of nice frames and the unique view sets the images apart.  It always helps to take a different view of an ordinary scene to make a memorable image.
Posted by Glenn Moore at 7:37 PM