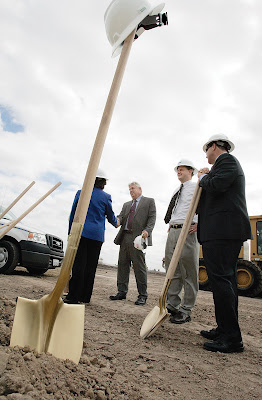 I hate groundbreakings.  I would rather wear bacon underwear in the middle of a pack of hungry, rabid pit bulls that cover a groundbreaking ceremony.  We try to avoid them like the plague but every now and then one slips into the shooting schedule.  I try to make the best of things and I wonder what to do. 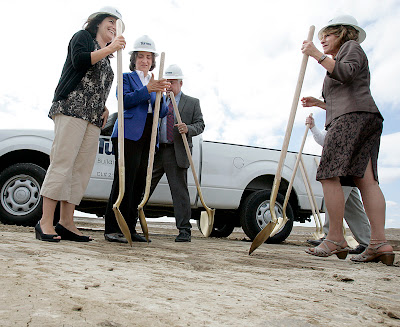 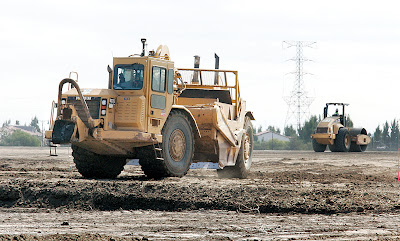 Tuesday was a great example of the groundbreaking dilemma.  Mountain House was scheduled to have a groundbreaking ceremony for the communities first ever high school.  It was a bog event for the small community and the editors decided to cover it and probably make it the cover for the Mountain House Press edition.  No pressure on me, I have to come up with cover quality art from an assignment we hate to cover. 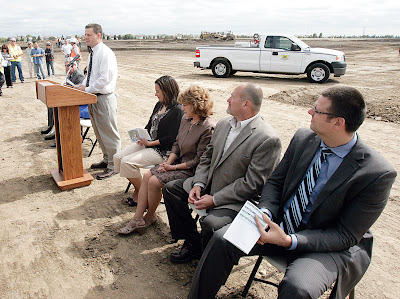 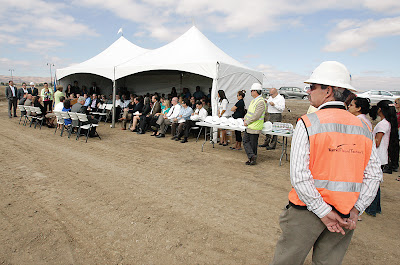 Don’t get me wrong it’s not that I have anything against Mountain House or their new high school project.  It’s we don’t cover groundbreaking, or check passing assignments for that matter.  The reason is simple; they are staged events. 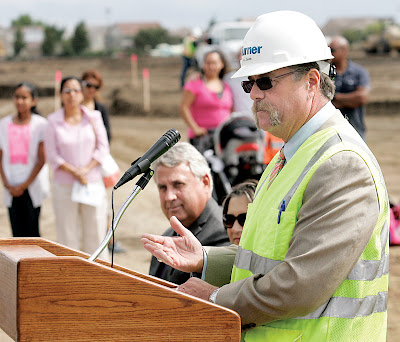 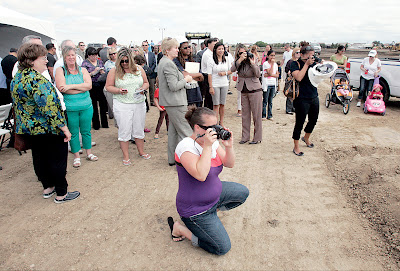 As soon as I saw the assignment I knew what it would look like.  Sometime in the ceremony, most likely at the end dignitaries lined up in a row would don hardhats and holding gold shovels would turn over a shovelful of ceremonial dirt.  It’s a pure photo op, cheesy as can be and in modern photojournalism or news coverage as well we tend to shy away from events like that.  We would rather talk about the project being started, its benefits to the community and how it got to this point.  We had a short conversation in the newsroom and we decided the historical importance of the event outweighed the reluctance of covering a groundbreaking.  But it is up to me to come up with art that isn’t of the groundbreaking at the groundbreaking ceremony. 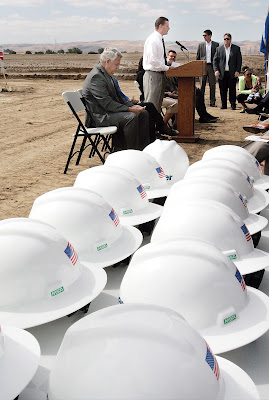 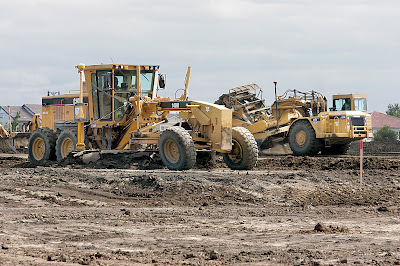 Huh?  Say what you ask?  Yes no matter how significant the event we won’t put a picture of someone shoveling dirt no matter what.  Time to turn up the creative juices at the assignment and think fast for a way to illustrate the story without showing a shovel full of dirt flung into the air. 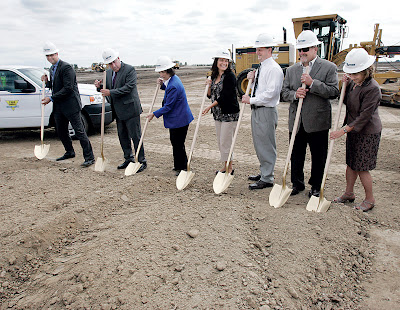 So the first thing you do is cover the event normally.  If it’s like any other groundbreaking they are going to have a host of speakers.  So my first thought is trying to tie a speaker into the scene.  Can I incorporate the background, does that tell part of the story?  Fortunately for me it did as they construction company was hot and heavy into grading the land.  They were told not to stop for the ceremony.  I selected a shooting position where I could use a long telephoto lens and compress the background distance to the speaker at the podium.  I was able to get a shot of the school district superintendent speaking while earth-moving equipment rumbled by on both sides of him. 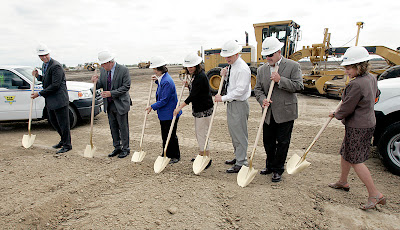 This was key-having a good storytelling shot early in the ceremony took the pressure off me.  Now I’m not panicking trying to get a cover-worthy shot that isn’t the shovel.  So now I can cover the rest of the ceremony normally, walk around the scene; look for a variety of shots including crowd, speakers and equipment.  I even tried to get creative with a row of hardhats for the dignitaries framed to lead the reader to speaker at the podium. 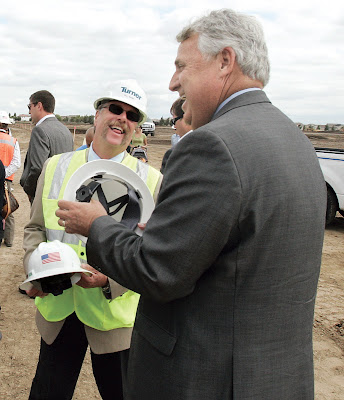 But soon or later is going to come the dreaded moment where I have to decide what to do with the shovel ceremony.  At Mountain House the construction workers had built a small mound of dirt that serve as the ceremonial patch of land.  So do I shoot it or not? 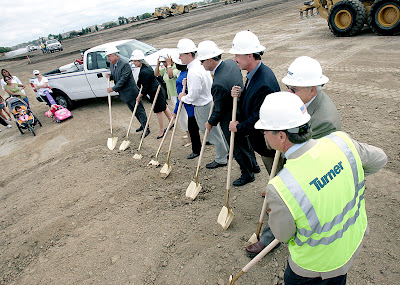 As a general rule just because I take photo does not guarantee that it will make it to the paper.  I can certainly take the shot and not use it.  Maybe it will be a Remember When photo a hundred years from now long after I am dead and buried.  So I get ready to shoot the shovel ceremony.  But nothing says that is all I can shoot. 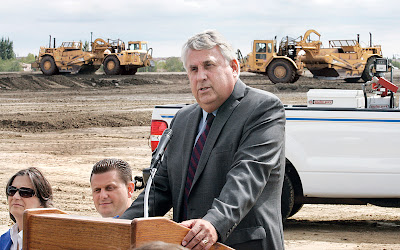 As they gather their gear I snap away at dignitaries donning their hardhats.  Some jokes are shared, some people laugh and that makes for a different photo.  I pick a low angle as they gather near the dirt pile and figure out who is going where.  I have the shovels and the dirt and technically it is not the dreaded shovel dirt fling so that shot may work too. 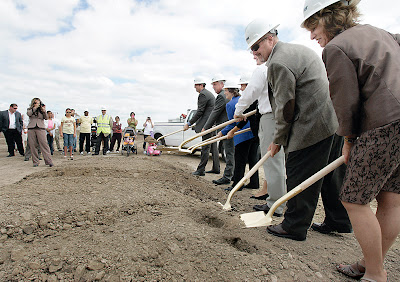 But eventually they line up in formation and with their golden shovels dip and into the soil in unison.  Reluctantly I fire the shutter and realize that the photo isn’t going anywhere.  The ceremony ends the shovels are thrust into the dirt pile and the participants turn and congratulate each other on the start of the new high school.  Holy crap! This is the moment!  I pick an extremely low angle and shooting with the wide-angle lens framing a shovel in the foreground with the people talking in the background.  This is has all the elements that tell the story; shovels, dirt dignitaries and a few hearty handshakes.  And no one posing for the camera with a cheesy smile plastered to their faces. 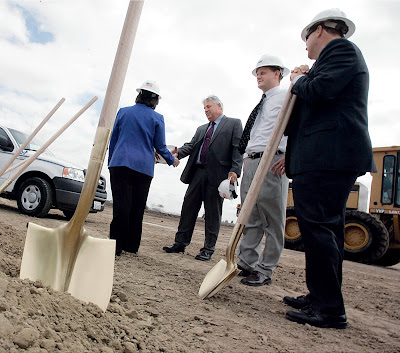 Sometimes the best moments for an event happen after it’s over.  It always pays to stick around and work the scene looking for a different shot than the standard humdrum event images.  I’m glad we covered the event, it is a big moment in Mountain House’s history and I was able to get a shot that told a little bit more of the story that seven people standing in a row.  It pays to never give up on an assignment and always try to think different on the same old scene. 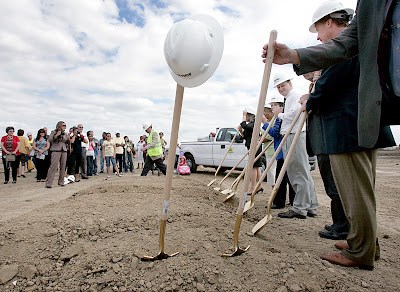