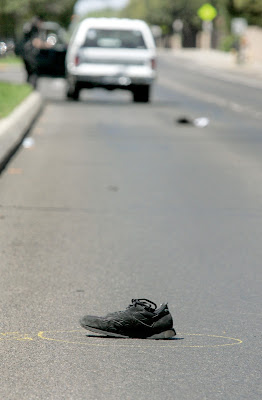 There is always one photo that is supposed to be the telling moment from an assignment, a picture that sums up the story in just one glance.  Standing on Tracy Boulevard today the one image that summed up the scene was a single shoe sitting on the pavement in a chalk circle.  Right shoe was scribbled next to it.  This was the result of a violent impact that sent one man to the hospital by helicopter and shut the road down for nearly four hours. 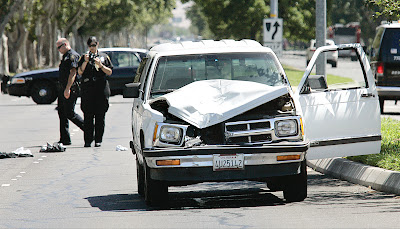 The last time I took a picture of a shoe at an accident scene I was vilified.  The driver had plunged into an irrigation canal and there was the possibility of other victims trapped in the water.  Today's accident scene was much different.  A teen crossing Tracy Boulevard near Loma Verde Drive was struck by a pickup truck heading north.  The impact sent the teen flying into the air landing dozens of feet from the point he was struck.  The shoe and his hat nearby in their chalk circles marked his position on the road.  The truck, its hood mangled from the contact with the pedestrian, sat further down the roadway.  The driver sat on the sidewalk looking distraught.  I've been to one too many of these kind of accidents. 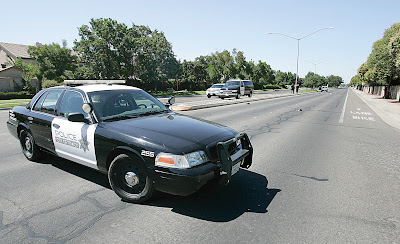 I knew what I find pretty much before I left the office for the crash scene.  On the more violent pedestrian accidents they always seem to be knocked out of their shoes.  It seems funny to say it out loud but at the scene it takes on a grim reality.  The shoes always end up yards away from where the body comes to rest.  I don't understand the physics of it but it is a stark reminder of the speed and force of such an impact. 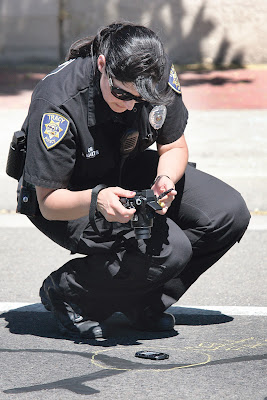 What I didn't expect to find was the level of damage to the truck.  Most of the pedestrian versus vehicle crashes I have gone to the vehicle either has minor or moderate damage-usually to the top of the hood and windshield where the victim rolls on top of after the collision.  But today's accident  had the hood of the truck heavily damaged, mangled and pushed back from the contact with the pedestrian.  The grill on the front of the truck was even broken, a headlight askew.

I arrived as the pedestrian was being loaded into the ambulance where he was transported to a nearby school field to meet the helicopter to take him to a trauma center.  His injuries were described by the police as a ruptured spleen, fractures in the bones of his lower body and contusions.  Looking at the pickup I think he is lucky to be alive in any condition. 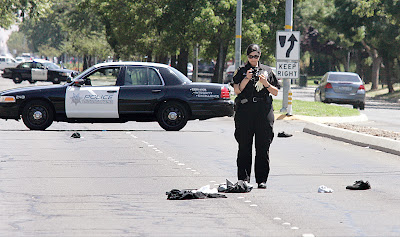 The one scene I wrestled with photographing at the crash was the driver.  I watched as he sat on the sidewalk near his truck looking overwhelmed by the event.  I don't think either man will be the same after today's crash regardless of who is found to be at fault. 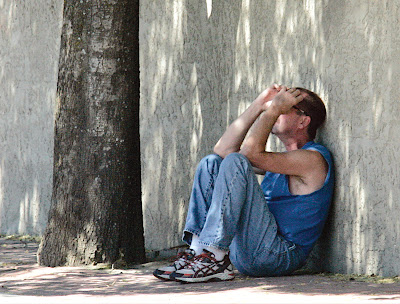 My day ended with the view of a single shoe lying in the roadway as police investigated the scene.  A tragedy marked by chalk outlines and an eerie emptiness standing on a closed roadway.  A scene I have  encountered before and unfortunately will probably again. 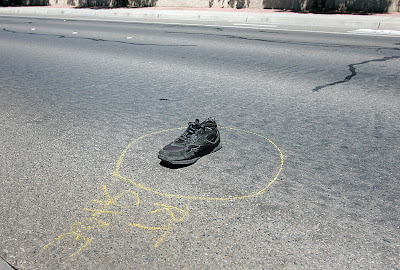