"Nothing worth having comes easy" 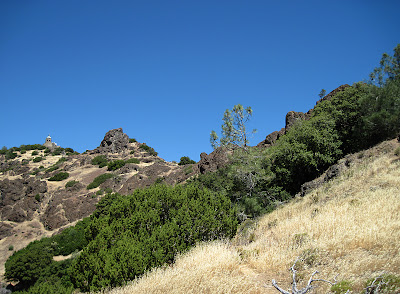 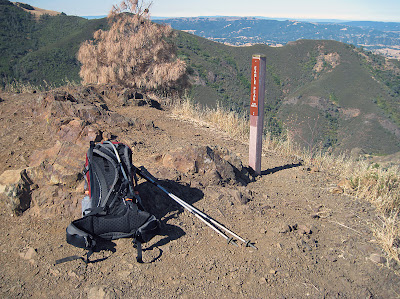 If it was easy anybody could do it.  At least that’s what I told myself looking up at the trail stretching upward on Prospectors Gap Road.  I was far from the summit and far from my starting.  I was in a no man’s land of sorts on my way to my final destination of the day. 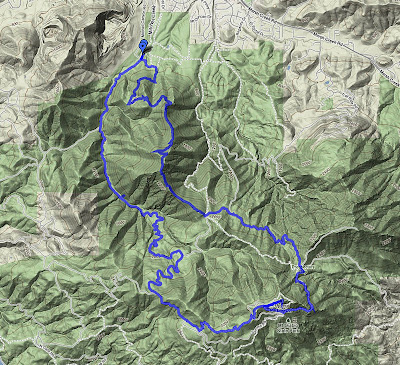 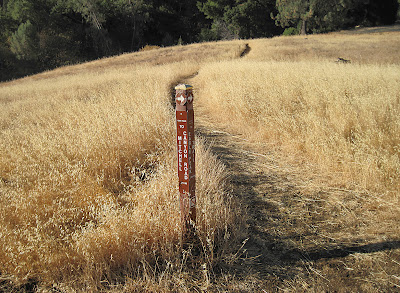 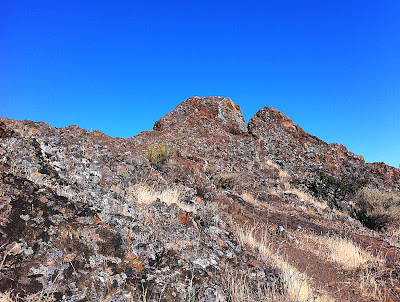 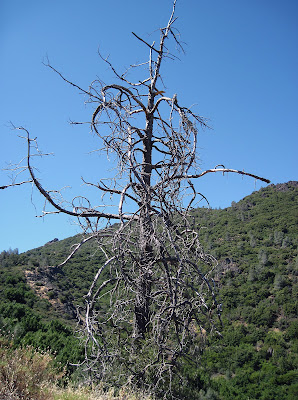 This is nothing new.  The really adventurous tackle four summits in one hike.  Eagle Peak, North peak, Mount Olympia and the main summit all in one day is for the truly courageous and slightly psychotic hiker.  I’m not there, yet.  Instead I decided to tackle a slightly easier but still demanding hike.  I would head up Eagle Peak, then down turning toward Mount Diablo’s main summit along Prospectors Gap Road to North Peak and then the Summit trails. 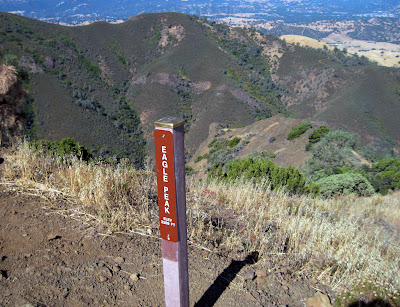 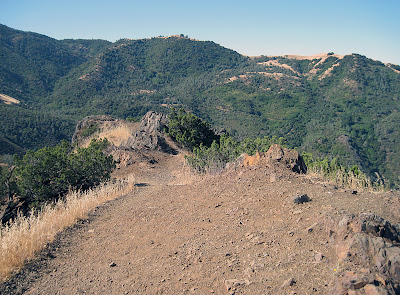 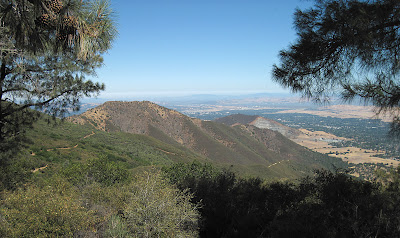 It looked on paper but looks can be deceiving.  Alone either peak is a good hike and string both together was going to be a challenge for sure.  After my little trail mishap of a couple weeks ago I decide to prepare a little better.  I carried six liters of water in two drinking bladders, two bottles of frozen Gatorade and some food for along the way.  Up at 4 a.m. Saturday I hit the road just after 6 for the drive to the Mitchell Canyon staging area. 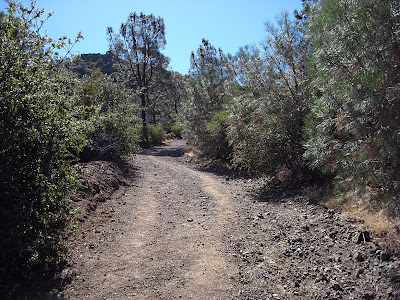 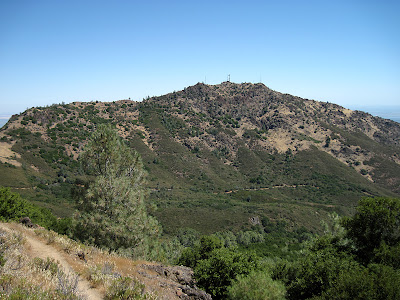 It was a little warm by the time I hit the trail at 7:30 for the first summit.  I would climb Eagle Peak heading out along Mitchell Rock Trail to Twin peaks and then pick up Eagle Peak Trail.  I have done this route a couple of times and except for sneaky tree branches that try to swat me in the head it is a straightforward climb.  The trail is not for beginners, you have to pay attention to your footing along the rocky and narrow single track sections.  I tried to keep a slower pace as I didn’t want to burn out on the first peak and I tried my best to stay hydrated along the way. 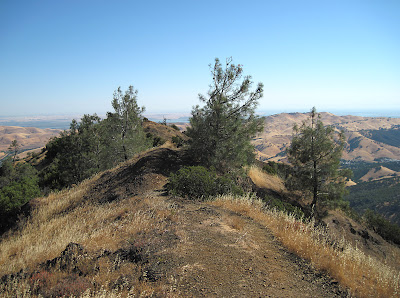 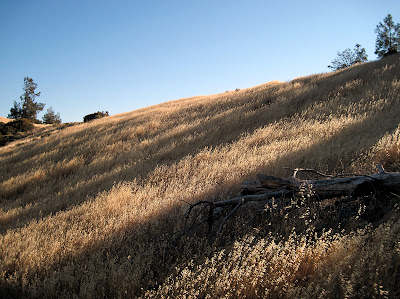 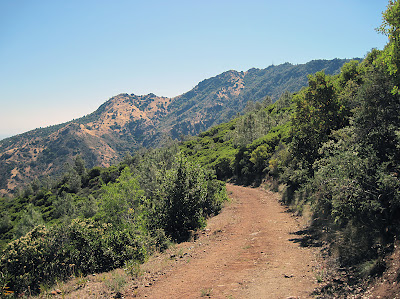 After a little more than an hour and a half I stepped on top of Eagle peak and walked to the signpost for a break.  Eagle Peak’s summit is a bleak sight; scattered rocks and a few trees adorn the surface.  Sipping a Gatorade I gazed across the way and saw my next destination, the small silhouette of the summit building just visible along the skyline.  It looked so far away. 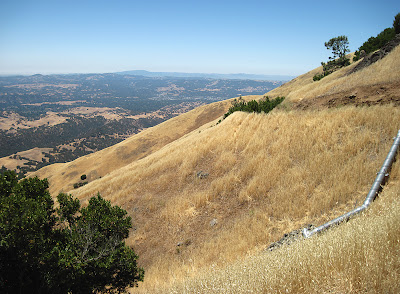 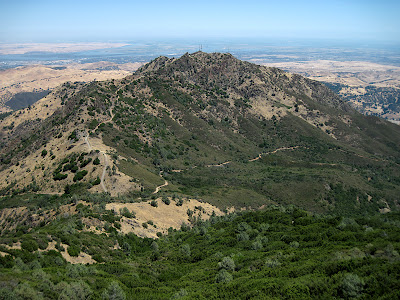 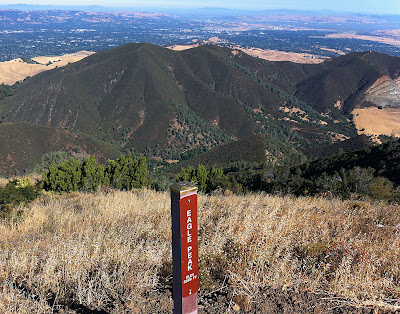 Heading down from Eagle peak I made my only navigation error, choosing the wrong line to head down a steep embankment.  It was one of the times where I found myself thinking it was too dangerous to go back up and too dangerous to go down.  Down always wins so I slid along the gravel for about 10 feet using my left hand as a brake to slow my skid.  No damage done I headed down to Meridian Ridge Road and the trek to the summit
Meridian Ridge Road is a short stretch of fire road that let me catch my breath form Eagle Peak’s climb.  The scenery almost resembles a desert with brush and a rocky trail to line your travels to the worst part of this hike, Prospectors Gap Road.  The trail here is a steep fire road marked by ruts and gravel to rob your feet of traction.  There is little shade and the steepness saps your strength quickly. 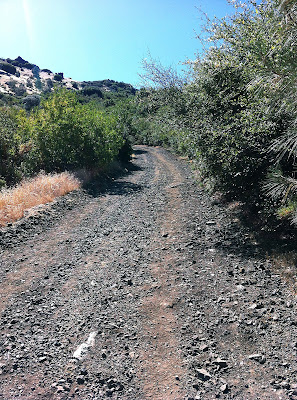 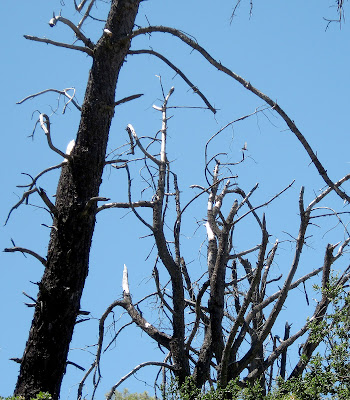 The trail seems like it goes on and up forever.  I was starting to overheat a little and quickly drank the rest of my Gatorade.  I was starting to think I had made a big mistake picking this adventure.  Off to my right I could see the summit building closer no but still several hundred feet above me.  I was just at the point where I was starting to feel the tingle of dehydration set in.  The trail was starting to resemble an oven as the noontime temperatures kicked in.  Mercifully I reached the North Peak Trail and began another climb this time ore gradual.  I would soon connect with the Summit Trail for the last push to the top. 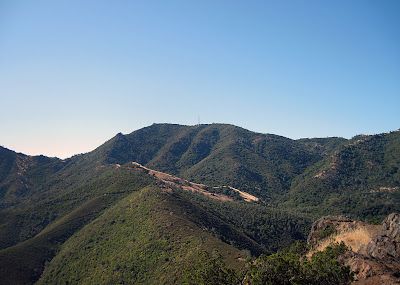 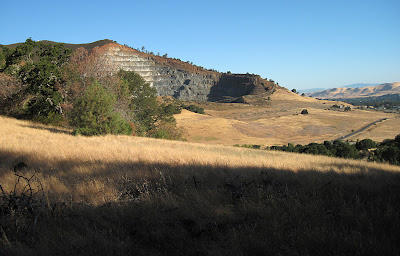 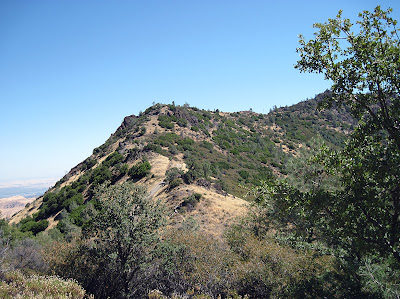 The Summit Trail winds its way up just below the summit building.  I could hear traffic along the road as visitors sped up the top.  Right about then my first three-liter water bladder hit empty.  I was still a ways out but I didn’t want to stop and change to the second one so I pushed on.  I was slowing down in the heat it seemed to take forever to reach the road.  I was starting to feel just a little sick.  Finally I reached he edge of the lower summit parking lot.  One last tiny climb along the Trail Through time took me to the radio tower and beyond them the summit building.  In just four hours and fifteen minutes I had climbed both summits. 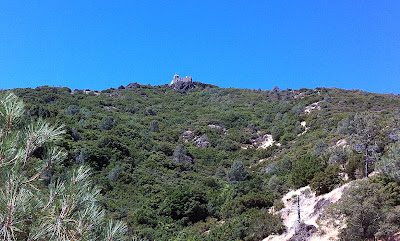 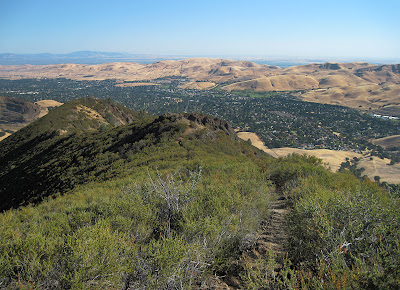 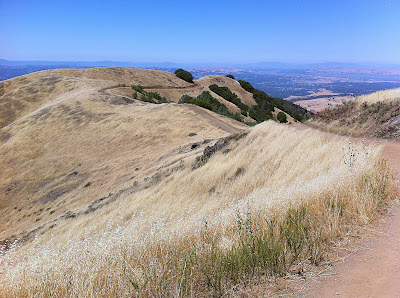 My trip down the mountain would take me along Juniper Trail to Deer Flat Road and then connect up with Mitchell Canyon Road back to the staging area and my car where a Gatorade encased in ice waited patiently for me.  Seven hours and fifteen minutes after I set out I sat down in my car to take the hiking boots off my badly blistered feet.  I was tired, sore and sweating profusely.  I couldn’t cool down quick enough. 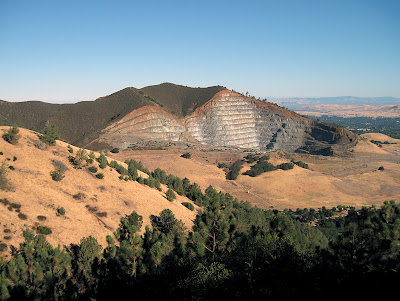 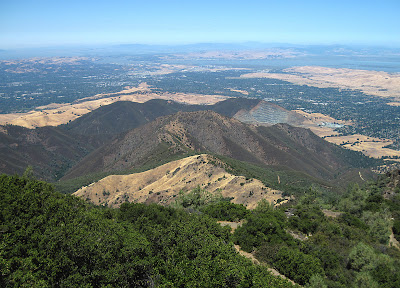 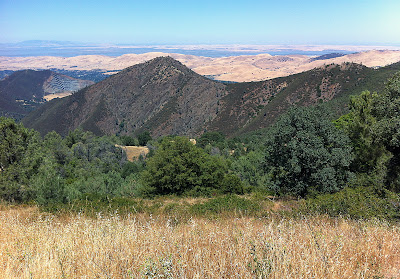 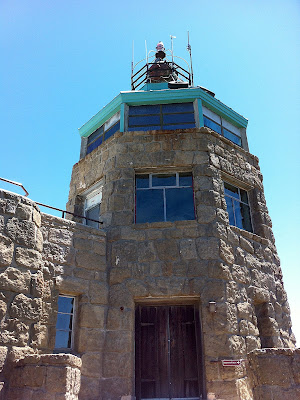 I wanted a dry shirt to drive home in so I went to the visitor center to look around and sneak some of their air conditioning.  I was talking to one of the docents and he asked me which hike I had done.  He stared at me and gave me the quote of the day.  “What are you training for?’ he asked.  Nothing I said, I just wanted to try the double summit hike.  He told it me it was an accomplishment to make that hike in this heat.  Paying for my shirt he gave me some maps for a few more challenging hikes along Eagle Peak and the summit trails   He congratulated me on my way out and I got to think that the best part of this hike was knowing I pushed myself close to my limit.  Sitting on Eagle Peak staring across at the tiny speck that was the summit building I had my doubts if I could make the hike.  Heading home, tired and sore I thought about the saying "the best things in life are the ones that are hardest to get."  I had reached my destination.  I never had a doubt I would get there.
Posted by Glenn Moore at 11:24 PM

Nicely done - doing that hike in the heat of summer is for the slightly crazy - having done that I'm sure you could do the 4 summits in cooler weather!