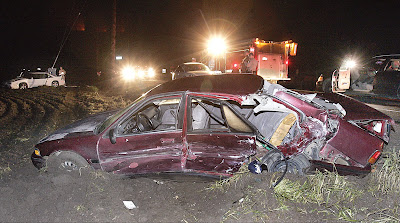 People often ask me if I am on call 24-7 for the Tracy Press. The answer is no, for now I am scheduled to work five days a week-eight hours a day. But news never believes in following schedules.

I had just got home Saturday night when I heard that sound that bodes of bad news. Sirens. Lots of sirens all passing by me. It seemed that the sirens went on for about 20 seconds or so. That is a really bad sign. I turned on my scanner thinking it was maybe a structure fire nearby only to hear the dispatches for a major accident on Grant Line Road at Bird Road. There were two cars in the crash, lots of people hurt and at least one child was ejected for the car.

So on my day off I grabbed my camera gear and headed out to the scene. On the dark two lane road two cars had impacted and were in a muddy field while a third was still on the roadway. Three Tracy Fire engine companies were treating the patients along with three ambulances. A fourth Tracy Fire engine company had to be dispatched to man the landing zone for a helicopter called in to transport the injured child. 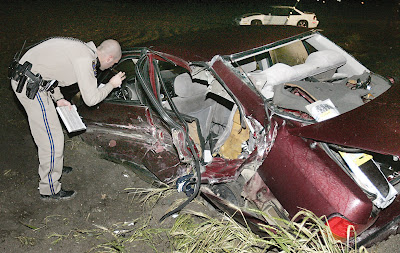 So on my day off I tramp through mud to get a better view of the damage to one of the cars. It is crushed on the drivers side and partially ripped open. The helicopter circling the crash site with his spotlight and the flash of the emergency lights are the only illumination on the country road. 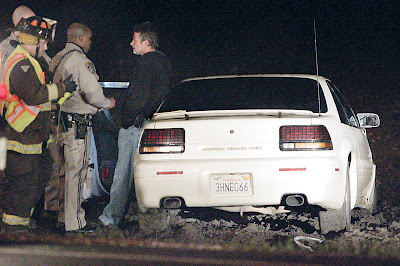 It is an eerie walking in the darkness watching out for traffic still passing through the crash scene. the helicopter is sent to land at a nearby school as the crash site field is too soft and muddy for a safe landing. 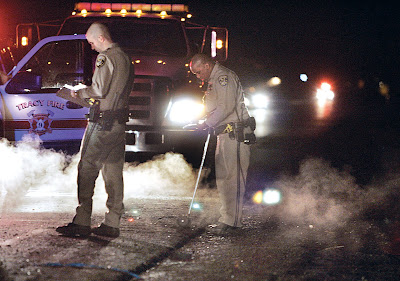 And that how it is. One minute goofing off at home on your day off and the next standing in a muddy field wondering if the child will live through the crash. You just turn it on and off. I'm not really "on call" as much as I just have to drop everything and run whenever I hear breaking news. Not a very fun thing to do and one of the things I like least about the job.
Posted by Glenn Moore at 1:15 PM