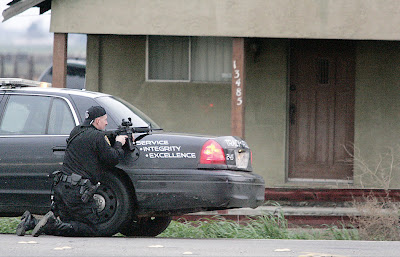 It is a bad sign when you see more than police car racing down a Tracy street with their lights and sirens on. Monday evening on my way to cover a basketball game I saw the parade of police cars and knew something was up. Turning on my police scanner I heard the call for shots fired at the Bank of America on Grant Line Road. My evening just took a more exciting path. 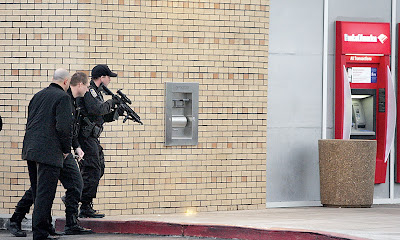 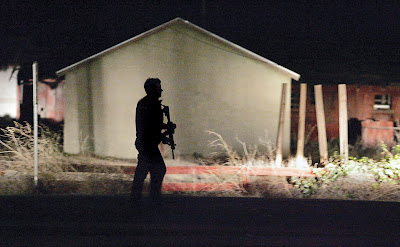 Two masked men in a carjacked van pulled up to the bank only to be greeted by a security guard who opened fire on them in the parking lot. The pair hopped back into their van and sped down the street ditching their getaway car a dozen yards up on Lammers Road and disappearing into a group of abandoned house near the corner. Police ringed the area and with automatic rifles trained on the buildings began a waiting game to locate the robbery suspects. 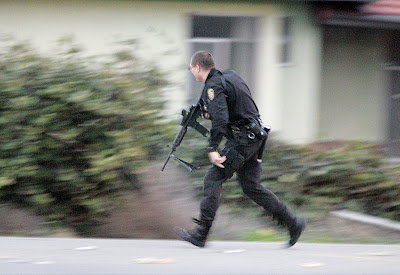 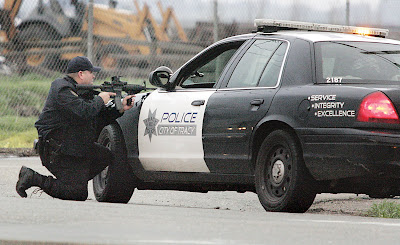 I don't think I have ever been to a news scene where that many police officers had automatic rifles out. Everyone was crouched down behind their patrol cares with their rifles trained on the buildings. Officers would run from one car to the next for cover. I could not see any movement from the dilapidated buildings, most of which were abandoned years ago. My shooting position was directly across the street standing in front of the Mongolian BBQ restaurant. I had a great vantage point to the police action just across the street and had a handy steel transformer box to hide behind in case any gunfire should erupt. 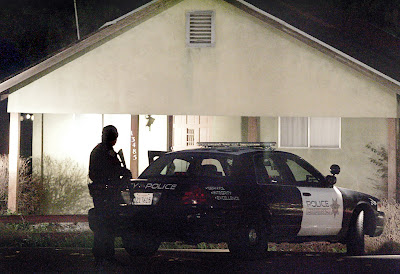 Mostly it was just a waiting game in the cold as nightfall descended. Officer stayed crouched behind their cars, weapons at the ready. As it grew dark the patrol cars were pointed to the houses and headlights and spotlights lighting up the abandoned building as they watched for any signs of the suspects. It was an odd scene-a group of heavily armed officers in front of me, me standing on a sidewalk shivering in the cold and a then all the people staring out at us through the glass window of the restaurant. I felt like a fish in an aquarium tank as people would step up to the glass and stare at the police proceedings. 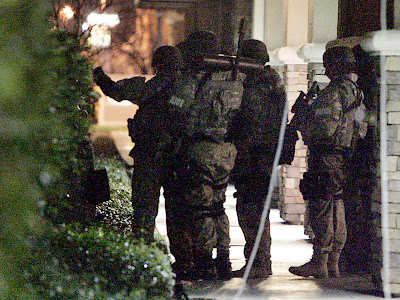 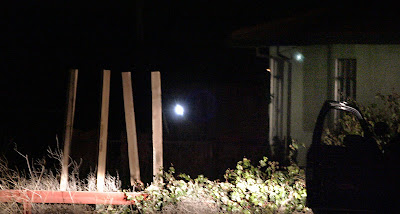 Coming up to 8:00 pm and nearly three hours into this police standoff and the SWAT team cross the road to search the buildings. All lights were turned off and an eerie quiet settled around us. I could see the occasional flashlight from a SWAT officer and the sound of glass and wood breaking as they forced their way into the buildings. After about an hour search of the buildings and tree line with no one found the suspects were assumed to have escaped in a second getaway car as fresh tire tracks were found near discarded clothing. 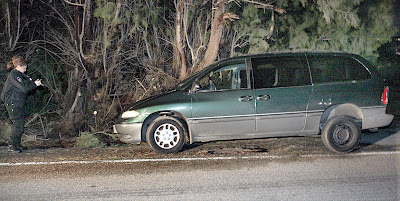 My near four wait for action in the cold and occasional rain was over. I had some nice shots of the officers in action and the crime scene lock down. I headed home to file a few quick pictures and thaw out from my bank robbery assignment. What a way to start the work week.
Posted by Glenn Moore at 4:21 PM

Sheesh, Glenn! That's WAY too many rifles for one day!

Good thing you had some protection behind that electrical box while you were out there.

Good thing you had something to stay behind with all the firepower that night.