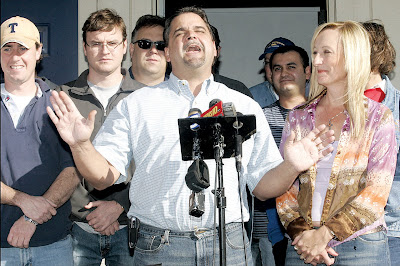 This photo has been sitting on my wall of rejected photos for over three years now. I took this picture of then congressman Richard Pombo as he laughed at the idea of running for congress again after losing his 11th Congressional District seat to Jerry McNerney. I tried to resurrect the picture again today when Pombo announced he was planning a run for the 19th Congressional District seat but alas, I was rejected again.

Oddly, this shot of a protester angry with the Tracy Press endorsing Pombo for congress did make the paper. Go figure, I just can't win.
Posted by Glenn Moore at 4:36 PM