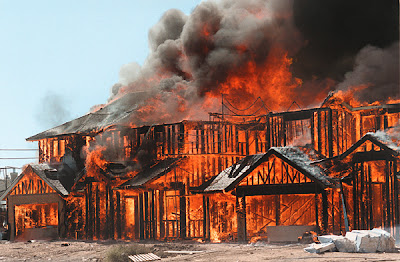 The big talk around the newsroom today was the devastating explosion and fire at Sycamore Village Apartments Wednesday night. I was off shift when it happened and staff members quizzed me this morning from the editor on down as to why I didn’t go to the fire? The answer is simple, I didn’t know about it.

Now I live and die by the scanner and as a general rule I try to leave it off when I am home. I have been known to flip the switch whenever I hear a lot of sirens screaming in the night but I don’t remember hearing them. Maybe I was too tired or I was just oblivious as I watched the history of coffee on the Discovery Channel or something like that. I am such a slacker.

The conversation quickly turned to how this was a massive fire, biggest news story, etc. trying to rub the fact in I missed it. But then I think back and it always seems like we are covering the biggest news story ever. Like the time I covered the Pebblebrooke fire.

Never tempt the gods of spot news with statements like “It’s a boring day” as they will strike down with a vengeful fury as I found out in the summer of 2001 when a plumber's torch set a row of nearly completed houses ablaze. The row of houses off Pebblebrooke Drive was a fiery inferno when I pulled up and the roar of the flames and the intense heat was unbelievable.

Fortunately as in the Sycamore Village fire no lives were lost but the talk in the newsroom that day was surely this was the biggest fire ever. That feeling lasted until the next big fire call sent me scurrying after the smoke and flames.

Hopefully this will be the last fire that lights up the Tracy skies but I have a feeling it will be not. I may have missed biggest news of the year but 2007 is still young and who know what lies ahead.
Posted by Glenn Moore at 10:05 PM