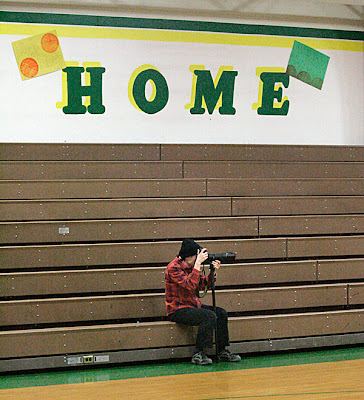 It was a little disappointing to see the crowd turnout for Thursday’s Tracy High basketball playoff game. I showed up early to make sure I would get a parking spot and right away I new I had made a major miscalculation.

Walking in to the gym with about fifteen minutes until game time I was surprised by the sparse crowd. The loudest noise coming from the gym was the warm-up music played over public address system, which reverberated across the gym walls.

You know things are bad when a photographer from another newspaper asks me what happened to the crowd and asks why the town didn’t show up to give some support at a playoff game. I really didn’t have an answer for him. I remember covering playoff basketball games in Turlock and the gym rocked from the crowd that at times could get a little rowdy. They definitely gave the team a home court advantage.

It was a little sad as I snapped a picture of one photographer with a set of bleachers to herself as the game began. The Lady Bulldogs would go on to lose the game; they played hard but couldn’t keep pace with the team from Sacramento. Maybe things could have been a little different with a bigger cheering section.
Posted by Glenn Moore at 9:54 PM